Any time there’s a new movie hitting theaters, there’s a good chance that some of your friends (and thousands of other people) are tweeting about it. Unfortunately, there’s also a good chance that you’re going to miss or forget about those tweets. fflick, a new site that was just launched by four ex-Digg employees, is looking to help fix that problem: it’s built a sentiment engine to try to harness Twitter and turn it into a massive movie critic.

From a looks perspective, fflick is well done, with a colorful design that isn’t overwhelming or cluttered. After logging in and hooking up the service to your Twitter account, you’ll see a grid of films that are in theaters and opening soon, each with a percentage rating showing the overall sentiment of the film.  Clicking on a film’s logo will take you to the real meat of the site: the filtered tweets themselves. Initially you’ll see a list of tweets from your friends that are relevant to the movie you’re looking at — this could prove very useful if you are following a lot of movie buffs on Twitter, but your mileage may vary.  If your friends fail you, the second tab presents a list of tweets that the site has deemed interesting, which usually means they were tweeted by a celebrity or news outlet. 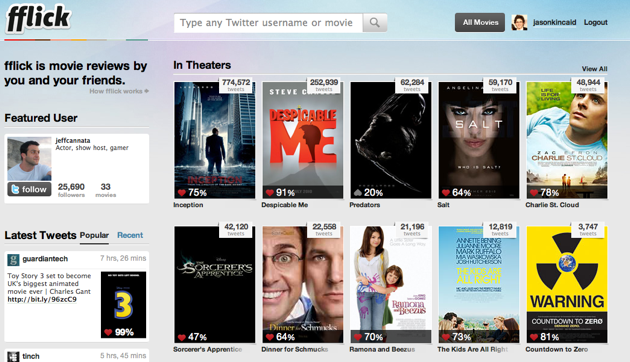 Finally, you’ll find the Positive and Negative tweets, which display a list of tweets that the site has automatically categorized using its sentiment engine. After looking through a handful of movies, I found that the system was pretty good at identifying both negative and positive tweets, though there were occasionally some tweets that were only mentioning a film in passing or were miscategorized. My biggest gripe at this point is that tweets that are anticipating a movie (“I can’t wait to see Inception”) and are actually reviewing a movie (“Inception was great!”) are categorized into the same bucket. In other words, just because a movie has a high positive score, it may not be any good — it might just have a lot of buzz.

The fflick team says that’s actually by design, as this gives studios a chance to tell at a glance if their film is generating a lot of positive or negative buzz. They also say that they’re going to let you further slice the data in the future, allowing you to filter by criteria like age, gender, and intent.

fflick is planning to generate revenue by selling the data it collects to studios (they can also make money through affiliate fees by selling tickets, and through advertising). The team also says that fflick is only the first vertical they’re going after — they have plans to apply their sentiment engine in other areas down the line. The team of four is currently raising funding, and counts Digg founder Kevin Rose as an advisor.

fflick is far from being the first service to try to track sentiment across Twitter. In fact, we previously covered Flixup, which was looking to do something very similar with tweets and movie reviews (that company has now pivoted to launch Miso, a site to share ‘what you’re watching’). Mombo does this as well.

Other companies that have tackled sentiment on Twitter include Tweetfeel and Rankspeed. It’s possible that Twitter itself may even offer sentiment tracking services at some point — Summize was addressing this problem back in 2007, and was acquired by Twitter eight months later to power Twitter Search. 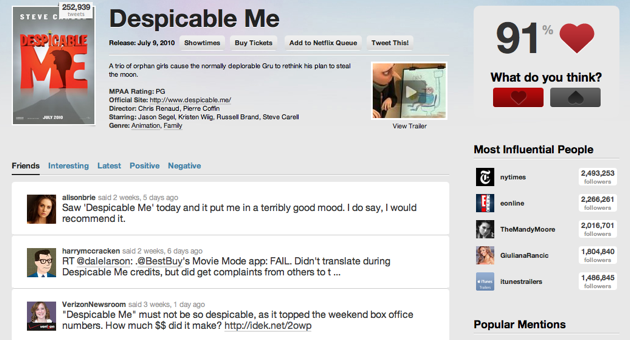