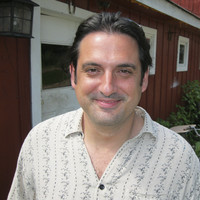 By now, I’m sure you’ll be aware that there’s a New York man named Paul Ceglia who claims he owns most of Facebook, which would turn him into an instant multi-billionaire if we were living in his Utopia and not planet Earth.

The wood-pellet entrepreneur filed suit against Facebook CEO Mark Zuckerberg last June, claiming 84% ownership of Facebook as well as additional monetary damages based on a web development project contract signed back in April 2003. The company calls the lawsuit ‘frivolous’ and without any merit whatsoever, so that story is to be continued in court.

Meanwhile, Bloomberg tracked down Ceglia for a fascinating face-to-face interview.

In said interview, the man says a number of interesting things, including:

– his arrest and a suit by New York Attorney General Andrew Cuomo two months later, both the result of complaints related to his wood-pellet business, got him looking through old files to find assets to pay back customers. One of those files held the 2003 contract with Zuckerberg.

– he had forgotten about the contract, which is why he stepped forward so many years later.

– now that he found it, he says he’s “willing to come after” the Facebook CEO, and that “a deal’s a deal”.

– there is more evidence to his agreement with Zuckerberg than the contract, including year-long email conversations.

– Ceglia remembers the 18-year-old Zuckerberg as a great coder but “probably one of the most difficult people that ever worked for me, in the sense that he simply could not finish his work.” Celgia adds: “He just could not keep a deadline.”

– Ceglia said he looks forward to a day when he might employ Zuckerberg again. He is quoted thusly: “If at some point in the future I start running Facebook, I guess I’m going to have to hire him to keep running the company. I really don’t have much interest in it.”

– About a month after filing the lawsuit, Ceglia signed up for a Facebook account. He likes it as it gave him a chance to get back in touch with old friends from high school.

On top of all this, it turns out there’s a new contestant for ‘owner of Facebook’ in town.

Bloomberg also talked to Andrew Logan, founder and CEO of StreetDelivery, which Ceglia did work for when he set up a competitor called StreetFax in 2003 and hired Zuckerberg to do some coding work on the company’s website.

Logan says that if Ceglia’s contract with Zuckerberg gives the latter an ownership interest in Facebook, that interest may in fact belong to him. His lawyers are said to be looking at the old contracts and settlement papers with Ceglia.

“We’re going to lay claim that I own it,” said Logan. “He was under contract to me.”

Who’s next in line?

Some day, someone should do a Hollywood movie on the origins of Facebook. Oh, wait.