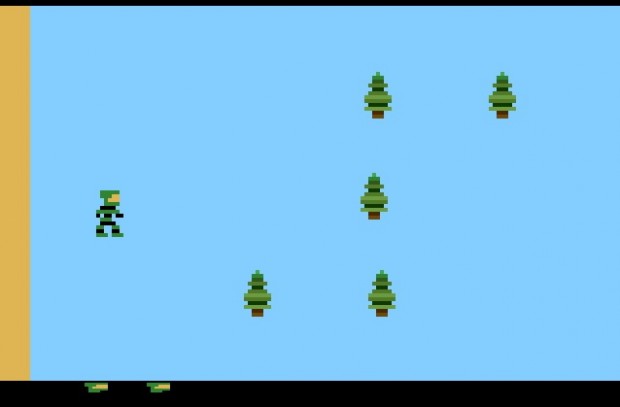 Now this is some fun stuff. A guy named Ed wanted to program for the Atari 2600 so he taught himself Atari assembly and created what amounts to Halo for the Atari. While the sprites are primitive and the gameplay is a little rough, it’s an amazing effort, especially for a dead platform. Best of all is his description of building the game from scratch.

The thing you need to realize about the Atari 2600 is that it is an incredibly limited machine. It has only 128 bytes of RAM and without bank switching the maximum program size is just over 4000 bytes. There are just two 8 pixel wide monochrome sprites, two one pixel bullets, a “ball” and a 40 pixel wide background (and even that is exaggerating…). There is no memory to store the screen image like any modern console or PC, instead it has to be drawn a line at a time by changing the values of the registers that control the sprites and background. The processor is so slow that only 76 clock cycles occur while a line of the screen is being drawn, and the simplest 6502 instructions take at least 2 clock cycles. So just to draw an image of the Master Chief is pretty tough. To create a complete game while living within these constraints is much harder.

You can read the whole post right here and download the game here. You’re going to need Stella to play the game. The amazing thing is that the ROM is only 4K which, I believe, could hold one triangle on Master Chief’s butt in Halo 2.