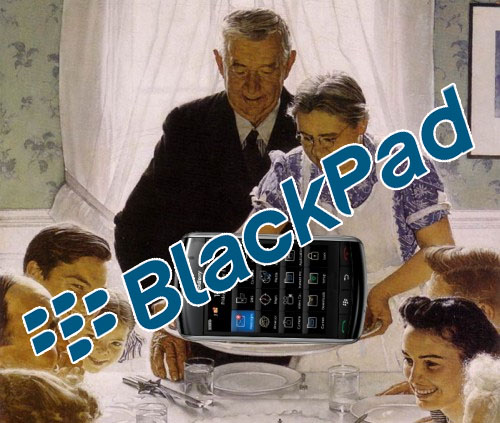 Sorry, BlackBerry fanboys, the BlackPad — or whatever it will be called — is going to flop in a monumental way. Remember how RIM’s last iDevice clone, the Storm, failed in such a public way? Yep, it’s going to happen all over again. RIM has no business making a consumer tablet.

We all need to give major props to Research In Motion. They were really the first major player to make smartphones relevant by offering a nearly-bulletproof mobile emailing system to business. Eventually RIM started making consumer-orientated email devices that worked with personal email accounts. RIM really showed the world that you need email while you were away from your desk.

But that’s where their claim to fame stops. Don’t misunderstand the Canadian company’s importance in consumer electronics’ history. RIM ranks up there with the best of them, but unless the so-called BlackPad is targeted solely at businesses and enterprise users — and all signs suggest otherwise — the BlackPad will fail.

I lived with a BlackBerry Storm for a year and a half. In fact, I just got rid of it for the Droid X. Before the Storm, I had a 7130e for two and a half years — my favorite phone of all time. BlackBerrys do a lot of things, but only one thing well: email. It’s still the best email device I’ve used partly because it’s clear that the OS was designed around that function and everything else was added later.

That’s where the BlackPad is going to have trouble. All the extra add-ons and capabilities take second seat to email and that’s not going to fly in a consumer-originated tablet. People are going to expect the BlackPad to be an iPad and they’re going to be disappointed. RIM’s touchscreen OS is a sorry clone of iOS.

iOS and its huge library of apps consumers were already familiar with is the iPad’s secret sauce. The BlackPad doesn’t have that. Oh, sure, there are BlackBerry apps available via RIM’s App World, but you can’t take any of those seriously. There are more fart machine apps in Apple’s App Store than there are applications in App World.

There is one way I could be wrong. If RIM totally forgoes the consumer market and instead goes after the Cisco Cius and the HP Slate, the BlackPad might be here to stay. This would require RIM to go back to its roots and target business before consumers. The thought is that because emailing — and in some industries, video conferencing — is such a big part of everyday corporate life, a large tablet kind of makes sense. This way RIM could get by without any fancy apps and rather focus on just a few areas like emailing.

Emailing on the iPad is fantastic. The form factor works well and in many ways, it’s better than using a smartphone. But many consumers can’t justify purchasing even the iPad just for one application. Its appeal is the vast range of tasks it can perform because of all the apps.

Businesses are different. They are used to spending extra cash on silly one-task devices. RIM has a fantastic opportunity to develop with just them in mind.

But that’s not how it’s going to go down.

Just like the Storm before it, RIM is developing a clone of an Apple device. It will likely target the same consumer group with a similar, but far less appealing, feature set. The screen size will probably be around 10 inches, it will probably have limited connectivity options although USB and SD card slots are likely, and Verizon will probably have a competitively priced data plan. All this is a recipe for public humiliation rather than a financial flop.

Remember back to before the Storm launched? It was the first device that was supposed to kill the iPhone. Verizon even had long lines reminiscent of iPhone launches. Then consumers tried the phone and found early versions to be buggy, slow, and overall gimmicky. The phone then went through a lot of criticism. It was the phone to hate and nearly everyone include myself took shots at it whenever possible. It was really that bad. But RIM kept on developing and supporting the phone. Apparently it wasn’t that big of a flop in RIM’s book, because the Storm 2 launched a few months back.

The same thing will probably happen to the BlackPad. RIM’s touchsceen OS still hasn’t evolved into something better than iOS even though it can effectively multi-task. It’s still the same core OS that puts email before everything and it simply will not translate well into tablet form. Moreover, if it isn’t the same but rather a totally different UI, then the BlackPad is in for even more hurt.

It’s not that I want RIM to crash and burn. I truly enjoy most of their products. I even came to appreciate the Storm although longed for a proper touchscreen phone with quality apps. It’s just I hate seeing consumers duped into buying clones of other products. They are rarely as good as the original. We’ll talk again after the launch, but I guarantee the BlackPad isn’t going to offer one legitimate feature over the iPad.