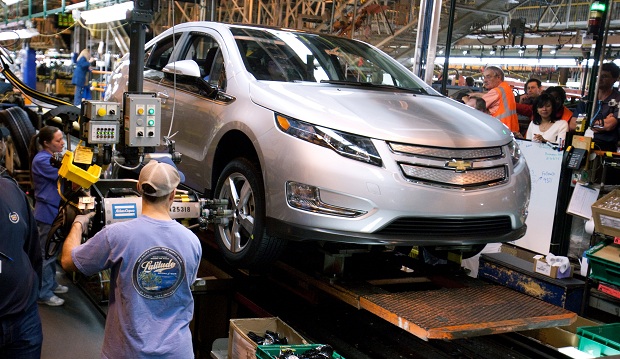 GM is banking large on the Chevy Volt and apparently feels confident about its success. The auto maker just issued a statement, which conveniently coincides while President Obama is touring the assembly plant, detailing the increased production estimate for 2012. The Detroit-Hamtramck facility will now pump out 50% more than previously detailed, an increase to 45,000 from 30,000.

Chances are this production bump is dependent on a successful roll-out of the first 10,000 vehicles slated to hit dealers later this year. If the $41,000 Volt quickly flops, then GM will probably scale the production numbers back to the initial estimate or less.

GM has a lot riding on, not only the Volt, but also the Voltec platform. As I detailed yesterday, GM’s future doesn’t ride solely on the Volt, but rather the future vehicles that will employ the same electric/gas parallel hybrid powertrain. But the Volt still needs to be successful. If the Prius — and it’s nearly identical but more expensive Lexus cousin — has taught us anything is that some consumers couldn’t care less about actual gas savings. They’re after the perception that they do.

DETROIT, Mich. – General Motors today said that thanks to strong public interest in the Chevrolet Volt, the 340-mile extended range electric vehicle, it will increase U.S. production capacity of the groundbreaking new car by 50 percent, from 30,000 units to 45,000 units, in 2012.

The announcement came as U.S. President Barack Obama toured the Detroit-Hamtramck facility, where the Volt is being produced now for sale later this year.

“The Chevrolet Volt provides drivers with the latest technology, outstanding innovation, and something no other electric vehicle can provide – peace of mind,” said Edward E. Whitacre, Jr., GM Chairman and CEO. “We are very proud to host the President of the United States at this plant, where the future of the American automobile industry is being built today by the men and women of General Motors.”

The expanded U.S. production capacity is the latest in a series of positive developments for the Chevrolet Volt. This week, participating Chevrolet dealers in launch markets began taking customer orders for the 2011 Chevrolet Volt, following the release of retail and lease pricing. The brand also recently announced unprecedented battery and vehicle limited warranties to bring value and peace of mind to Volt customers. And the number of U.S. launch markets for the vehicle recently was raised from three to seven. In the past few weeks, more than 25,000 people have joined the Chevrolet Volt enthusiast list.

The Volt offers a total driving range of about 340 miles and is powered by electricity at all times. For up to the first 40 miles, the vehicle drives gas- and tailpipe-emissions-free using electricity stored in its 16-kWh lithium-ion battery. When the Volt’s battery runs low, a gas-powered, engine/generator seamlessly operates to extend the driving range another 300 miles on a full tank.

The Detroit-Hamtramck plant received $336 million in new investment to prepare for production of the Volt, part of more than $700 million GM has invested in eight Michigan facilities to support Volt production since 2008. This includes a 33,000 square-foot battery systems lab in Warren; a battery assembly facility in Brownstown Township; and supporting engine and stamping operations in Grand Blanc, Bay City, and three plants in Flint.

About General Motors: General Motors, one of the world’s largest automakers, traces its roots back to 1908. With its global headquarters in Detroit, GM employs 205,000 people in every major region of the world and does business in some 157 countries. GM and its strategic partners produce cars and trucks in 31 countries, and sell and service these vehicles through the following brands: Buick, Cadillac, Chevrolet, GMC, Daewoo, Holden, Jiefang, Opel, Vauxhall and Wuling. GM’s largest national market is China, followed by the United States, Brazil, Germany, the United Kingdom, Canada, and Italy. GM’s OnStar subsidiary is the industry leader in vehicle safety, security and information services. General Motors acquired operations from General Motors Corporation on July 10, 2009, and references to prior periods in this and other press materials refer to operations of the old General Motors Corporation. More information on the new General Motors can be found at www.gm.com.