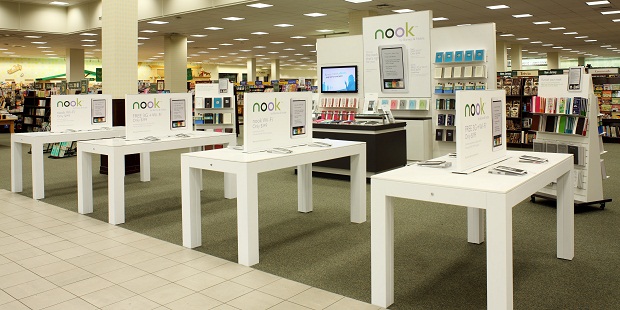 The Nook and the Kindle is currently locked in a heated battle. The B&N shot first a few weeks back with a sudden price cut, but Amazon responded likewise. Then Amazon dropped a huge bomb just the other day with the Kindle mkIII, which took nearly everyone — probably including B&N — by surprise. But Barnes & Noble isn’t going to close up shop and admit defeat. They still have one huge advantage over Amazon: in-store displays.

B&N’s just-announced plans includes expanding in-store Nook displays into 1,000 square-foot boutiques with multiple operating Nook demo units. Adjourning displays will be used to showcase the trendy accessories and useful add-ons such as lights and cases. All this means is book shoppers can actually spend some time with the ereading device before they drop $150 or $200 on the Nook. This is something Amazon doesn’t have.

Sure, the Kindle is now sold in Target stores, but it’s a different market. B&N shoppers are there for books — or coffee — and so it only makes sense to take full advantage of the foot traffic. Chances are the new, larger Nook displays will be located in a prime location with the goal of reaching a lot of shoppers. These displays will no doubt help convert more B&N shoppers into Nook owners than anything else. Many consumers know the Kindle brand and name, but they might find that the Nook is a perfectly acceptable device after spending some time with it. The ereader war just got a little more interesting.