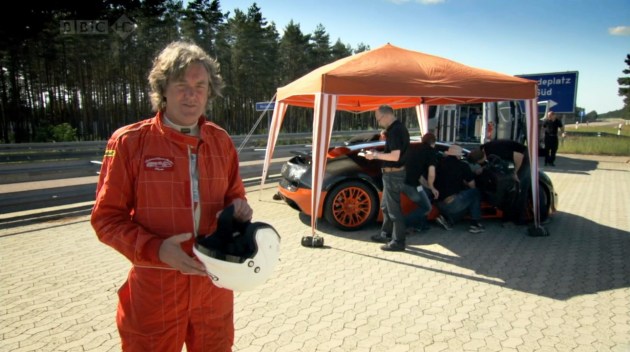 A few days ago we learned that the Bugatti Veyron Super Sport is now the fastest production car on the planet. Pretty exciting, yes. A little bit after that we learned that Top Gear, the very awesome British TV show I watch despite my having zero car knowledge, was involved in the record-breaking in some capacity. Basically, Captain Slow himself, James May, actually broke the record first—but then his record was smashed, too.

I took the liberty of ripping a few minutes of the segment from last night’s episode, embedding it here for you all to see.

My favorite part of the whole segment is that they waited until the air was at its thinnest before attempting to break the record. Science.

Slight problem: YouTube may have blocked the video in some countries. Maybe the BBC would have preferred I linked to a torrent or nzb of the entire episode? I mean, really, who is this hurting?