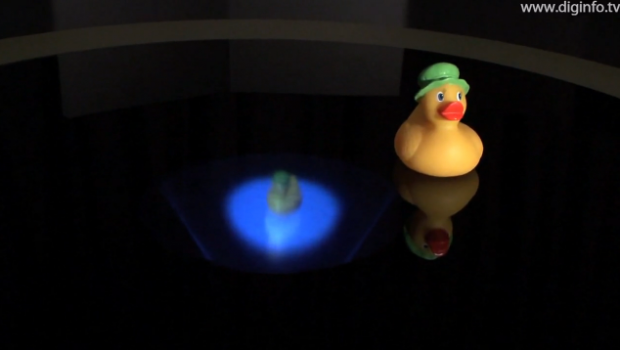 The computer-synthesized hologram system we’ve shown you earlier today isn’t the only piece of amazing 3D tech Japanese researchers are currently working on. The NICT, Japan’s National Institute of Information and Communications Technology, has developed a cool table top display that makes it possible to let multiple viewers see 3D images through 360 degrees.

The main bullet point here is that NICT’s display (dubbedd fVisiOn) doesn’t require a glass case or any other kind of equipment to be placed on top of he table. The institute manufactured a special optical device that makes it possible to create 3D images above the table, via micro-projectors that are arranged in a circle.

While 360 degrees are technically possible, the current prototype produces images that can be viewed through 120 degrees (for which a total of 96 projectors are needed). The NICT plans improvements not only in that area but also wants to boost image quality and size. According to the researchers the fVision could eventually even reproduce an entire soccer stadium in 3D.

More infos in this video (provided by DigInfoNews in Tokyo):