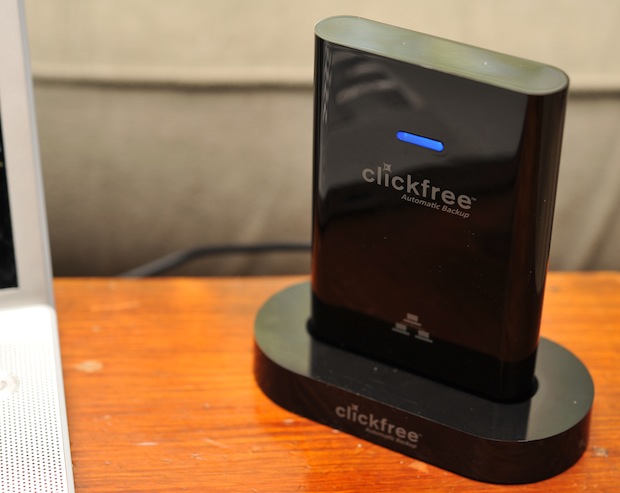 Short Version: The Clickfree C2N USB drive provides a simple way to back up multiple computers without a NAS. The software is functional and user-friendly, but better network access might have set the device apart a bit more.

Full review:
Clickfree’s C2N is a portable USB drive that comes pre-installed with software for both the Mac and the PC. From a hardware standpoint, there’s nothing particularly spectacular about the C2N;it’s nice and compact, the drive has a short cable permanently attached, but it also has a spot to plug a longer cable into the bottom of the enclosure. The C2N also comes with a desktop dock, allowing you to leave the drive plugged in and waiting for the next scheduled backup procedure. The drive itself is a standard 2.5″ laptop drive, in a glossy black enclosure with a blue LED to indicate when the drive is powered or being accessed.

The whole process is essentially transparent once you have the software installed. The software will run on each computer that you have it installed on, and automatically talk to the drive no matter what computer you have it plugged into. This means that if you have, say, two desktop computers and two laptops in your location, you can plug the C2N into one of the desktop computers and the backup software will automatically back up to the drive using your wireless or wired network. I do realize that isn’t necessarily anything new — network administrators have been setting up backup software to do this type of process for years. The difference is that the Clickfree software is essentially plug and play, and easy enough to use that I’d recommend it to even the least technologically-inclined person.

Unfortunately, the Clickfree system isn’t perfect. Obviously, you have to leave the computer the drive is plugged into powered on, as well as any computer that you want to back up automatically. Generally, this just means leaving the computer on overnight, but that’s sometimes less then ideal. And you definitely want the backup to run in the middle of the night, because of the speed limitations of the USB 2.0 connection that the drive uses.

I would have liked to see an ethernet connection in the dock, but that takes us more into the area of a NAS and the C2N is designed for the home user rather then someone who wants the capabilities of a full blown network backup system. The Clickfree software is also always running in the background. Of course, it doesn’t have a large memory footprint (it’s actually quite small) but there is always a small icon somewhere on your computer reminding you that the backup system is there.

Conclusion:
I recommend the C2N for anyone who needs an easy to set up, transparent backup system. Most people don’t back up their computers as often as they should, and products like the C2N are ideal to help overcome that laziness factor. It’s also so easy to setup that I’d recommend it to pretty much everyone, from the business user who just wants things to work, to the home user who wants to make sure that those pictures of grandma don’t get lost when their hard drive fails.