After logging a record $15.7 billion in third quarter revenues, Apple says it is now on track to hit $18 billion in the next quarter. As any analyst on Wall Street will tell you, Apple is notorious for under-promising and over-delivering when it comes to guidance. The only question is, by how much will Apple beat in Q4?

On today’s episode of TechCrunch NOW, MG Siegler and I took one more look at Apple’s earnings. Siegler predicts that fourth quarter revenues will clock-in at above the $20 billion mark, or roughly double revenues for the year ago period (Apple recorded $9.87 billion in Q4 ’09). While his detractors might dismiss this forecast as just another rant from a self-described Apple fanboy, $20 billion sounds just about right, if not conservative. (See video above.)

With iPhone 4 and iPad sales truly revving up in the fourth quarter (and with Antenna-gate quickly disappearing in the rear-view mirror), Apple will churn out massive numbers. Even the Mac category, which many thought would see cannibalization as iPad sales picked up, strengthened in the third quarter. Sales rose 33% year over year, to record Mac’s best quarter ever with 3.47 million units sold. Regardless of whether you hate or love Apple’s products, it’s impossible to deny that momentum remains heavily in their favor.

Back to the initial question, by how much will Apple beat? It’s difficult to say, but if recent quarters are any indication Apple’s Q4 revenues will likely come in 20%, or more,  above the company’s forecast. In 2009, Apple’s revenues, on average,  came in at roughly 8% above guidance. That gap has widened significantly this year. For the first three quarters, Apple’s actual revenues were roughly 25.5% above forecast (with the smallest gain 18.9% in Q3). If this trend continues for the rest of 2010, Apple will easily surpass $21 billion in revenues. 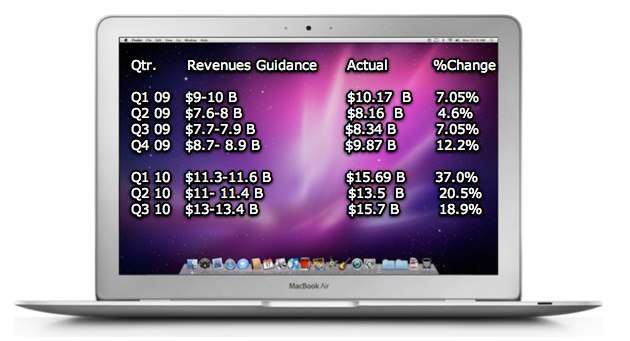 (Note: Great news! You can now now subscribe to the daily RSS/Podcast feed of TechCrunch Now by clicking on these links: