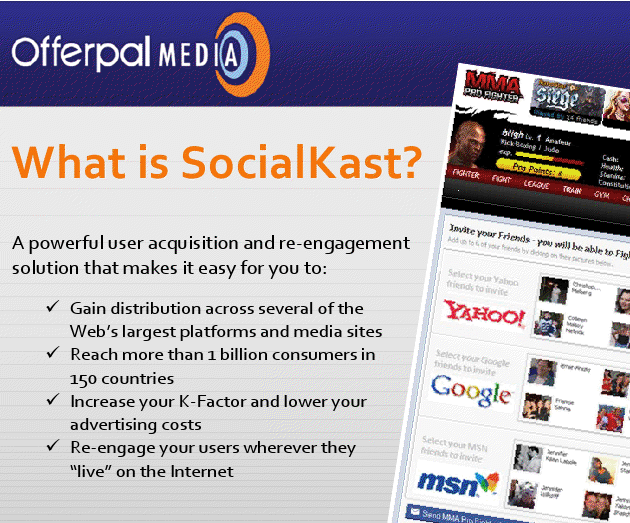 Last week, Offerpal Media announced that, as a direct result of Facebook transitioning games and applications from their proprietary currencies to the newly-launched Facebook Credits and partnering with rival Trialpay, the company saw itself forced to lay off people who worked on its Facebook monetization initiatives.

Today, the company is launching a new product that should make it clear it would be unwise to consider that event a lead-up to its eventual demise.

With SocialKast, which the company will be presenting later today at the Casual Connect conference in Seattle, Offerpal aims to relieve many a game developer that was hurt by Facebook’s recent decision to seriously cut down on the many ways they could distribute notifications via the social networking site in order to get new users to sign up.

Dubbed a ‘user acquisition and re-engagement solution’, SocialKast aims to enable game developers to connect with audiences across social networks and media platforms such as Yahoo and Google, opening the doors to massive distribution of game-related notifications to roughly 1 billion users in over 150 countries.

George Garrick, Chairman and CEO of Offerpal, says it has proven costly and difficult for game developers to find new means of distribution in the current environment, and that the new product aims to solve that problem and allow them to accelerate viral growth and at the same time lower the cost of acquiring new users.

SocialKast allows game developers and social platforms to ‘write once’ in order to interact with multiple platforms using a set of lightweight REST messaging APIs and Javascript calls, allowing them to distribute both user-to-user and app-to-user invites, gifts, notifications and other types of text-based or graphical messages directly into the activity streams and email inboxes of Offerpal’s partner sites.

Messages from a game on any platform or Website using SocialKast will be distributed through Yahoo’s Updates API, for example, which will make it possible for those actions to be shared by users in a variety of formats across Yahoo properties.

A new generation of spam, or a legitimate way to reel in new users across multiple platforms? Time will tell how users feel about it, but for sure game developers will be drooling over this.

Access to SocialKast is available for free – for now – as a value-added service to select game developers and social platforms using Offerpal’s monetization platform, which allows gamers to earn virtual currency by taking part in alternative payment options such as advertising offers, surveys, shopping rewards and other brand engagements.