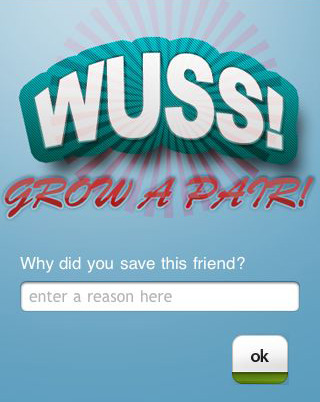 You never know where you are going to see something innovative—even right here the heart of the “Sili-corn Valley” that is Central Ohio. This week, I met a gentleman by the name of Dan Rockwell at the local Mobile Monday gathering, and we had a short conversation about his company’s latest mobile app called Chump Dump.

The somewhat irreverent concept is both funny and serious; gain points for ceasing to follow people on twitter. The app recalls Crispin Porter’s Whopper Sacrifice campaign for unfriending people on Facebook, but has a much purer and utilitarian result in mind—clean up the list of people you follow on Twitter using game mechanics, actual metrics and crowdsourced conversation. As funny or rebellious as the app seems on the surface, when you get down to it, its goal is functionally sound and it gets people to ask the real question “why am I following this chump on Twitter?”

Ultimately, I think an app like this could actually add more relationship value and reputation status to your Twitter stream if you are not actively analyzing the people you follow. Or, you know…you could just have fun dumping people too.

You can also see the list of “dumped chumps” using their Chumpdar (like as in radar) mashup . Pretty funny.

Check out Dan’s own description of the app in the video below and while you’re at it, I would recommend checking out some of the other products over at the Big Kitty Labs website, like ParsePlz or HashParty.

These guys seem to be thinkers with solid design chops and a great sense of humor!