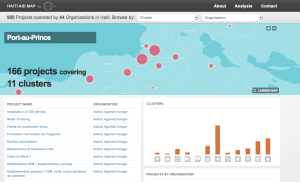 Haiti is still struggling to recover from the 7-point magnitude earthquake that struck on January 12th. The natural disaster disrupted everything there, including the systems that keep water clean, garbage away from homes and farm land, and people (let alone habitat and animals) healthy.

Despite an outpouring of donations and promises to help from international nonprofits, shelter, food and medical care are still hard to find and hard to deliver in Haiti, according to recent reports from the United Nations. A new website — HaitiAidMap.org — aims to increase the efficacy and visibility of U.S. non-government orgnizations relief efforts on the ground in Haiti, though.

It maps NGO projects in country, updates them in real time, and makes information about these searchable by category, location or the NGO’s name. The site was created by InterAction, a Washington D.C. based alliance of 192 poverty-alleviating NGOs, in partnership with the U.S. Chamber of Commerce Business Civic Leadership Center. It is sponsored by FedEx. 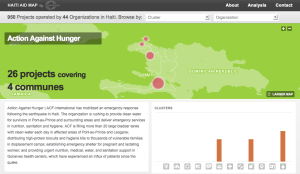 The president and chief executive of InterAction, Samuel A. Worthington, says he was inspired to use mapping innovation for NGOs originally while working on a special report for former president Bill Clinton about the relief efforts following the Indian Ocean Tsunami in 2004 that killed 230,000 people across 14 countries.

“We wanted to apply lessons learned from the Tsunami immediately following the earthquake in Haiti. One of the first things we did was to establish an NGO Coordination Office there, associated with the United Nations, to ensure better coordination among nonprofits with the UN-system and Haiti’s government both. [We] clearly needed to know where the NGO community was working at all times. A map had been done after earlier hurricanes, but it was static, a sheet of paper. Given the size of the engagement, we needed better data,” he says.

HaitiAidMap.org allows NGOs to link their databases (which can be as simple as Excel spreadsheets) to the site. It renders all of their data about in-country projects on a single, easily readable, interactive map. The projects are searchable by name, location, or “cluster,” through check boxes, drop-down menus, and the interactive map itself. (There’s no search field, however.)

Clusters, or categories of relief work include things like: shelter and non-food items, water sanitation and hygiene, protection or health.

Clicking on the map, it’s easy to learn things like: large central cities such as Delmas, Port Au Prince and Carrefour have more than 100 water sanitation and hygiene relief projects, while the Southern city of Port Salut has just two. Yes, Port Salut was further from the epicenter of the earthquake. But it was still damaged badly enough that many of its communities still lack necessities, and electricty though temperatures this summer have routinely ranged above 100 degrees Fahrenheit there.

Because HaitiAidMap.org aggregates NGOs’ data, relief workers and philanthropists can use it to identify where there may be a gap in services, and thus where their help is needed.

InterAction, Worthington says, has a broader goal for its mapping project: “We want to be able to map all U.S. non-government organizations’ projects globally, to see all of their billions of dollars of work around the world. By harmonizing data, and providing this mapping tool that’s linked to the databases of NGOs, starting with members of InterAction, we think we can do this within the decade.”

Eighty-one InterAction members are involved in Haiti relief efforts, and about 50 have projects operating there.