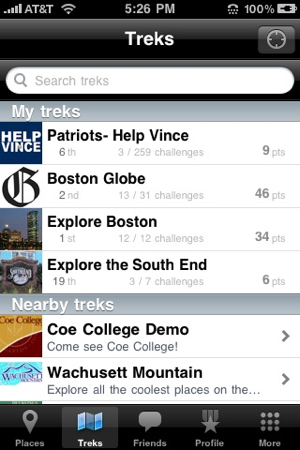 Over the last few weeks, the New England sports press has been scratching their heads over mysterious T-shirts they received from The Patriots that were emblazoned with the words, “HELP VINCE“. The shirts obviously refer to NFL star Vince Wilfork, but give no indication as to what he needs help with. As it turns out, he’s “lost” his Super Bowl Ring, and he needs help finding it — and the Patriots are giving location-based startup SCVNGR a major publicity boost in the process.

You see, starting today the Patriots are running a large-scale Help Vince campaign across New England as the team looks to engage its fans in the offseason. And to do that, it’s turning to SCVNGR to power an array of Patriots-themed location based challenges, badges, and treks as users vie for prizes, which include a grand prize lunch with a member of the Patriots squad. The Patriots will be promoting the ‘Help Vince’ campaign across New England with TV spots, billboards, and more. You can see the team’s site dedicated to the campaign here.

SCVNGR has built out challenges at 200 different locations across New England, including sports bars, a covered bridge out in Maine, and Boston Common. As fans complete challenges they’ll accrue points, with the top scorers earning a variety of prizes (including the aforementioned Patriots lunch).

This is obviously a huge win for SCVNGR, which is about to get free promotion that reaches millions of people (actually, SCVNGR is getting paid for their role, as the startup has spent a lot of time building out custom challenges and badges). This is easily the company’s biggest partnership, and it’s probably going to help it hook a substantial number of new users.

Of course, there’s a big question here: Why SCVNGR? Foursquare and Gowalla have both been around for much longer, and Foursquare in particular has landed many parnerships with well-known brands. SCVNGR CEO Seth Priebatsch says that the service can offer more customized experiences than competitors like Foursquare — where Foursquare simply offers badges, SCVNGR can prompt users to take a photo wearing Patriots gear, or complete a more engaging task. The Patriots can treat the ‘Help Vince‘ challenges as a sort of standalone, Patriots-themed game on SCVNGR; it would be harder to do that on competitors’ platforms. 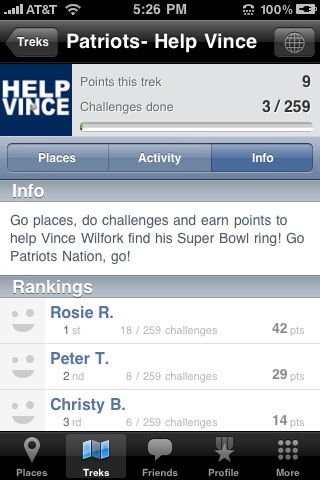