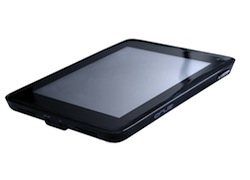 Prepare yourself people, the tablet/e-reader wars are about to heat up. Virginia based Velocity Micro announced their new “Cruz” line today, consisting of the 7″ color Cruz Reader, the 16:9 Cruz Tablet, and the kid-friendly Cruz StoryPad. The most interesting part? The entire Cruz product line runs the Android OS.

A kid friendly e-reader? That actually sounds like a brilliant idea. The Cruz StoryPad provides a kid friendly, drop resistant, multimedia based platform to “help your child read, learn, and interact using a simple and intuitive touch interface”. The StoryPad has a 7-inch screen, simplified navigation, and pre-installed content. Available in pink, blue, or green, the StoryPad will have and MSRP of $149. A bit steep, but as a parent, I think it’s an excellent concept.

Next we have the Cruz Reader. Yes, it’s another e-reader, this one has a 7-inch screen, 800×600 full color touch screen navigation (going for the magazine market), built in wifi, and a full web browser. Because it’s based on the Android OS, it also comes with a built in dictionary, notepad, calendar, alarm clock, contacts list, and “other useful apps”. MSRP on the Cruz reader is $199, pushing into a rather difficult price point. We’ll see what happens in August though.

Finally we have the Cruz Tablet, again featuring a 7-inch screen, 800×480 capacitive display, and built in wifi. Keep in mind the entire Cruz line runs Android, so you can reach your own conclusions about what exactly you’ll be able to run on the thing. It does come with 4GB of built in storage, with an 8GB SD in the box for pictures of puppies, or kittens, or your favorite car. MSRP is $299, and again, the entire Cruz line will be available this coming August. Can they compete with the other products out there? Time will tell, and we’ll definitely be trying to get one to review.

From the official press release:

“Since 1992, Velocity Micro has been dedicated to building remarkable consumer electronics,” said Randy Copeland, President and CEO of Velocity Micro. “With the development of the Cruz line, we were able to take those enthusiast sensibilities and package them for the mainstream consumer to create a product that’s not only amazing, but affordable as well.”

At under one pound and about a half inch thick, the $199, 7” Cruz Reader goes everywhere you do, making it perfect for students, avid readers, frequent flyers, and techies. Additional features such as video playback and web browsing provide a much richer experience than traditional e-ink readers at a more reasonable price than a tablet.

Key specs and features include:

At $299, the Cruz Tablet offers a truly mobile experience at an affordable price, finally giving consumers an Android-based tablet alternative.

Spec and feature upgrades include:

The Cruz Reader and Cruz StoryPad will be available from most major retailers and direct from Velocity Micro in August with the Cruz Tablet following on September 1st. For more information or to sign up for e-newsletter updates, visit www.CruzReader.com.