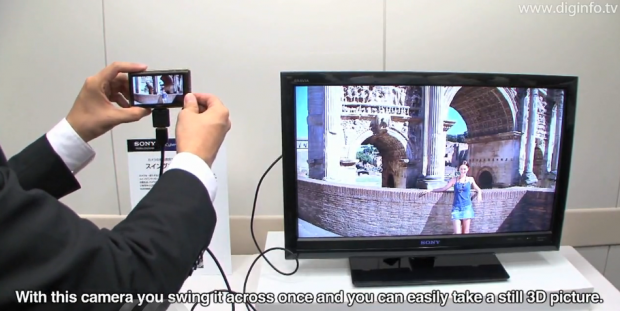 Yesterday, we’ve shown you the two new “3D”-Cyber-shots Sony presented during a press conference in Tokyo, the DSC-WX5 and the DSC-TX9. As they have only a single lens, both models can’t really be called 3D cameras, but the video embedded below shows that the 3D effect users can produce with these Cyber-shots actually looks quite decent.

The 3D images, which are made by “stitching together” up to 100 2D frames, can be viewed on external 3D displays just by connecting the camera. However, you can see a 3D effect on 2D screens, too – even on the LCDs the Cyber-shots come with. Both cameras come out in Japan in August, followed by other markets one month later.

In the video made by DigInfoNews during the Sony press conference in Tokyo yesterday (it’s subbed in English), a Sony representative demonstrates how users can create 3D shots and digs deeper into other functions as well.