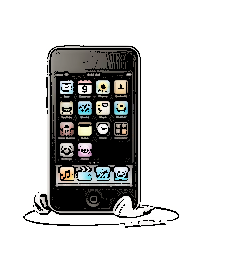 Don’t new iPods come out every year right around September, after Apple has exhausted its supply of old models with a back-to-school promotion? The following information gels quite nicely, then. UK retailer John Lewis told its partners that a new iPod will be released this September, and that Apple will aim it at the youth market and push it more as a multimedia device. Kids today, with your fancy new iPods and that.

The iPod, in addition to this youth-oriented re-branding of sorts, will come with a 5-megapixel camera, one that’s able to shoot HD video. The idea is twofold: one, you gets kids uploading video to YouTube, which is the thing to do these days, and two, FaceTime. Combine the iPod with a Wi-Fi connection and you’ve got a cheap-ish communication device.

There will also be a renewed push to making the phone more “social networking” friendly. That’s just as well: I recently read something about how a not insignificant percentage of kids are giving up Facebook, if for no other reason than they’re bored with it. Things don’t stay cool forever.

Perhaps most interestingly will be a new or improved accelerometer and gyroscope. The thinking is, kids like video games, so let’s make the new iPod as gaming-friendly as possible. That’s nothing wrong with wanting to make the iPod and gaming platfrom—Capcom has done a fine job with its mobile ports—but there’s a pretty big difference between iPod gaming and iPhone gaming.

With iPhone gaming, you’re already carrying your phone anyway, so why not race a couple of laps in Racing Game while on the subway? No need to carry an extra device. With iPod gaming, yeah, that’s an extra device in your pocket. At that point you might as well be carrying a PSPor DS (or soon, 3DS). Gaming on an iPod would be no better, from a convenience point of view, than gaming on a traditional portable system, systems that have far deeper libraries.

See you in September.