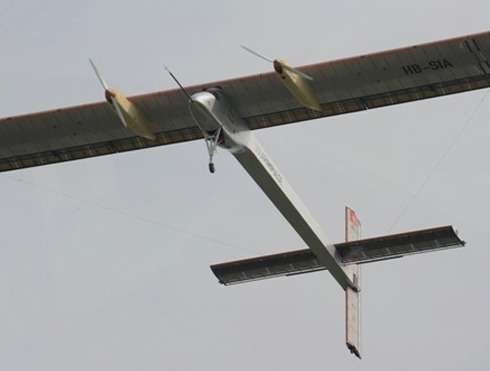 Yes! The Solar Impulse’s flight that I mentioned yesterday was a huge success! It landed safely in Switzerland after a 26-hour haul across the Heavens. The people behind the flight hope that it will prove to skeptics that solar power is a viable form of energy after all. I mean, powering all of life on Earth apparently means nothing to these skeptics, but to see an aeroplane in the air? Money.

You may be thinking, “Wait, it was in the air for 26 hours? What happens when the Sun sets?” Nothing more than good, old fashioned batteries.

The plane was loaded with 12,000 solar cells, cells that collected the Sun’s rays as it streaked across the sky. High in the sky, too, reaching an altitude of 28,543 feet.

Now, the overall idea behind the flight is to prove to the haters that solar power is sufficient for human machines. Yeah, the Sun gives life to, um, life, but that’s not exactly the same as powering an aircraft. What can you say now? Solar power kept the Solar Impulse in the sky for 26 hours! Its backers say that they can keep an airplane in the sky for as long as they want, provided you stick enough solar cells and have enough batteries on there.

Does this mean that your next flight to Grandma’s house for Thanksgiving will be on a solar-powered flight? Of course not, but it could serve as an example to the big manufacturers out there that, hey, maybe it’s worth putting together a solar-powered prototype or two? Oil’s not going to be around forever—never mind how expensive it is to extract as it is!