The Pew Research Center’s Internet and American Life Project is releasing the results of a May survey that evaluates the mobile internet use of Americans. The report found that six in ten American adults now go online wirelessly using either a mobile phone or a laptop with a wireless internet connection, which isn’t surprising.

Across the board, Americans have increased both their mobile online connectivity as well as their interactions. Nearly half of all adults (47%) go online with a laptop using a Wi-Fi connection and mobile broadband card (up from the 39% who did so as of April 2009) while 40% of adults use the internet, email or instant messaging on a mobile phone (compared to 32% of Americans who did this in 2009).

The report’s most interesting findings centered around mobile connectivity. Pew found that more Americans are accessing the internet on their phones (38%) than playing games on their devices (34%). Of course, both of these actions were dwarfed by taking pictures (76%) and sending or receiving text messages (72%). 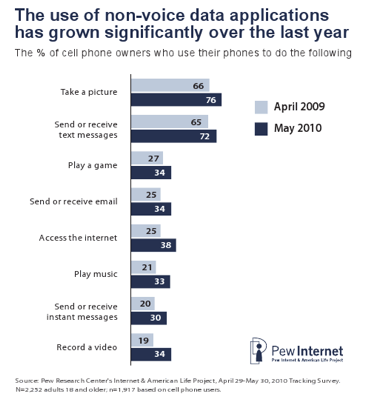 More than half of cell phone internet users (55%) go online from their mobile phone on a
daily basis. And half (54%) of mobile phone owners have used their phone to send someone a photo or video, 20% have watched a video on their phone and 15% have posted a photo or video online from their mobile device. Additionally, 9% of American adults now go online using an mp3 player, e-book reader or tablet computer. Three percent of respondents said they owned a tablet device and 4% of those surveyed owned an e-book reader like a Kindle.

The study seems to reinforce something we already know. Americans are increasingly interacting with their mobile devices as they would with their laptops or desktop computers. And as users continue to flock to smartphones, the reliance on mobile phones for connectivity will only increase. Looking forward, the Pew Center might want to start tracking mobile internet usage versus mobile apps on phones to see which one will dominate.