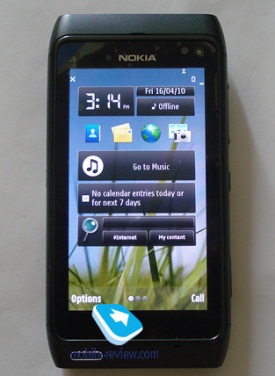 A couple of months ago, Russian gadget blogger Eldar Murtazin posted a review of a new Nokia phone, the N8 – the first to feature the Symbian^3 platform – before it was officially announced. This thing happens all the time, but there’s much more to this story.

A day after the review, Nokia posted a message on its blog titled ‘One of our children is missing’, positing that Murtazin somehow got his hands on a very early, pre-production prototype with dated software that was far from ready. The company also added that it was “determined to protect its intellectual property”.

Nokia is now making good on that promise.

In a blog post published moments ago, the Finnish mobile juggernaut explains that it had formally requested Murtazin the return of “all unauthorized Nokia property”, which he apparently didn’t respond to.

As a result, Nokia says it has now contacted Russian authorities to assist the company in the return of the goods.

For what it’s worth, from what I can gather from Murtazin’s blog posts on the matter (in Russian), he has tried to contact Nokia over the past few weeks to no avail. He also claims the whole ordeal is now doing damage to his reputation.

Going back to Nokia’s statement, the company claims its move is unrelated to Murtazin’s recent criticism directed at the company and its products, and that it has no intention to have his blog Mobile-review.com shut down.

But the company does seem keen on exploring legal actions against Murtazin, as well as casting more doubts over his objectiveness with regards to the mobile industry he covers:

To be perfectly clear, we are defending our intellectual property by asking for the return of all unauthorised property in Mr. Murtazin’s possession.

This is not about attacking bloggers or people who give critical reviews of our products. So as we don’t confuse the issue, while this individual does operate a blog, he is also very public about being a ‘consultant’ to other international mobile manufacturers. He has confirmed he is in possession of unauthorised Nokia prototypes and other intellectual property, and we have asked for their return. Whether Mr. Murtazin’s actions were as a blogger, or whether he is acting in the capacity of a consultant in order to provide information to his clients is an open question.

We’re not able to comment on what would or would not happen if the unauthorised property were returned. It would be inappropriate to speculate on future actions at this stage. However, you can be sure that we are prepared to take all appropriate and legal measures to protect our intellectual property. We believe every individual or organization has the right to protect itself.

Nokia says it will let the Russian authorities determine what the most appropriate course of action is going forward.

Update: Murtazin shares his side of the story, claiming Nokia is trying to make him look like a blogger and not the professional journalist he really is, in an email. He also explains that the story we linked to at the beginning wasn’t an N8 review per se, but rather a weekly column piece called birulki64is.

Murtazin says he has never received any letters from Nokia, and that the company is thus lying. He also reiterates that he’s been trying to reach Nokia’s PR team, but hasn’t heard back from them for months.

To be continued, no doubt.