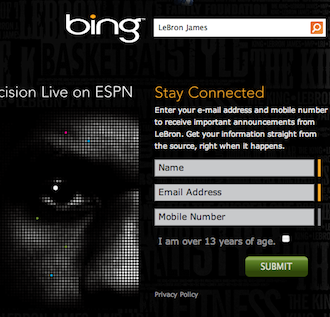 Sure, D-Wade and Chris Bosh may be teaming up to play together in Miami. But LeBron James has a new partner of his own: Bing.

Tomorrow night, millions of people around this country (and likely the world) are going to be tuning into ESPN to watch the NBA star announce his decision about where he’ll be playing basketball for the next several years. ESPN has created a special program for the event which they’re calling “The Decision” and they’re promoting the hell out of it. Microsoft Bing will be sponsoring that show and more importantly, likely donating millions to the Boys and Girls club charity — a stipulation James’ camp wanted for the event.

And that’s not all Bing is doing with LeBron. As you can clearly see on lebronjames.com right now, Bing is prominently displayed as the search engine on the site. That couldn’t have come cheap for Microsoft as millions of fans are hitting the site daily trying to get the latest word about where James will go.

Bing is obviously touting both deals today. “We are excited to be a part of LeBron’s important day and to be the official decision engine of the site LebronJames.com and one of the presenting sponsors of ‘The Decision’ program,” Lisa Gurry, Bing’s Director, writes on the Bing community blog today. She goes on to note Microsoft’s long-standing relationship with James — yadda, yadda.

The bottom line is that this is a smart move by Microsoft to get some key prime time exposure for their search engine among a key demographic.