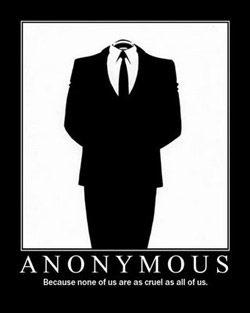 Kudos to Blizzard for putting an end to Anonymous Cowards everywhere. Well, at least on their own official forums. Starting with the release of StarCraft II in a few weeks, Blizzard WILL DEMAND~! you use your real name to participate in the forums. Oh sure, you’ll also be able to have your in-game character’s name displayed alongside your real name, but don’t let that fool you: accountability has finally reached the world of message boards.

To be specific, you’ll have to use your Real ID, Blizzard’s new catch-all account management system. The idea is that you and your friends will be able to have one Real ID and be able to see each other across all of Blizzard’s game.

This also means that the next time you QQ on the World of Warcraft about a nerf or buff to another class, or that you’re beyond furious that the severs are down on Tuesday for one more hour than estimated, the whole world will know that it’s you.

You will no longer be able to hide behind your alter ego, Fernando Zorres.