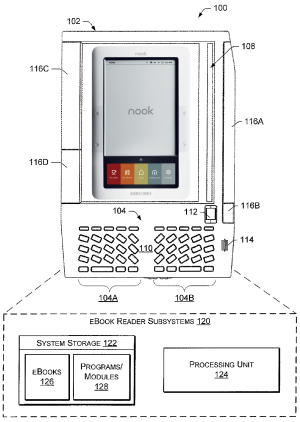 A patent applied for by Amazon in 2006 has been made public today as a consequence of its being granted, and its language is rather more wide-ranging (and forward-thinking) than we might have expected. Depending on the interpretation, Amazon’s patent may be broad enough to justify a lawsuit over devices like the Nook and Alex, both of which sport a design clearly claimed by Amazon.

The relevant language in the patent starts off thus:

That alone would be be sufficient to give pause to the designers of similar devices — and unfortunately for them, it gets worse. The real hit is this little series:

44. The handheld electronic device of claim 42, wherein the LCD is substantially rectangular and is disposed below the electronic paper display.

45. The handheld electronic device of claim 42, wherein the LCD is touch-sensitive and is responsive to touch input.

Subsequent points cover the placement of such display directly below the primary one. Does that sound like it is describing a Nook exactly? It sure does to me. Remember, this was filed in 2006. Having been awarded, it is now public, but due to the intricacies (and inefficiency) of the patent-granting process, Amazon has forborne from voluntarily revealing it or taking actions that would force it to do so. So they’ve got a patent with language clearly encompassing their biggest e-book competitor and a half-dozen other devices. But that’s not the whole story.

For one thing, Amazon has not followed up on this design. The LCD position indicator on the original Kindle wasn’t the best UX choice, as it turns out, and the Kindle 2 and all subsequent designs have lacked the feature. There’s an argument there that they have not actively used the patent they were awarded, or that they abandoned it when they made the claim 42 device without the features they mentioned. The patent does feature the industrial design of the first Kindle, but that’s because it was simultaneously being proposed as an exclusive hardware design as well as “one exemplary implementation” of the type of reader they were going for. The patent language does not appear to limit Amazon to that design. 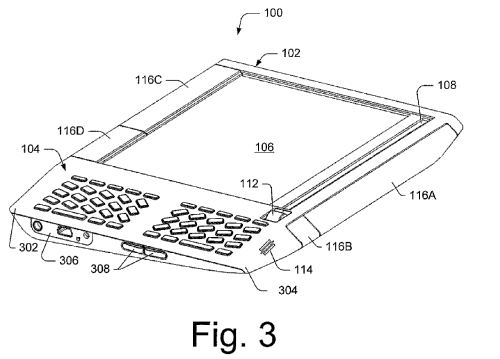 Bearing in mind that I am not a lawyer, it seems to me that this approach folds pretty quickly. The design with the relevant element (Kindle 1) could easily have been scrapped in favor of one of the other forms specified by the patent, or for some transitional forms (current Kindles) while they get the implementation right on the claim 42/claim 51 device. Considering the length of time the Patent Office took in confirming this application, they can’t really take Amazon to task for not having this potential other device ready. But that’s just a layman’s objection (to a layman’s objection).

A second, and pehaps more compelling, argument against Amazon restricting other device by means of this patent, is that they said nothing when the Nook and others were released. There must have been a huge run-up to the release of the many dual-screen readers out there — and I’m sure some patents were filed. Is it for the USPTO to alert the unknowing parties, or must Amazon step forward? And if Amazon does not step forward, and the product makes it to market without any objection from the owner of the infringed-upon patent, is any punitive action justified? Or has Amazon missed its chance?

Once again, I am not a lawyer. The questions here are ones that just come naturally to a layperson’s mind, which means they are likely either provided for by law or completely unheard-of by the relevant organizations. The patent process is, after all, appallingly anachronistic when it comes to the high-turnover world of consumer electronics.

There’s really little to say until one of the companies involved comes forward with a statement. I’ve contacted Amazon, Barnes & Noble, and Spring Design (which alleges that they had the dual-screen design first), but have yet to hear back from any of them. I’ll update this post as soon as that happens.