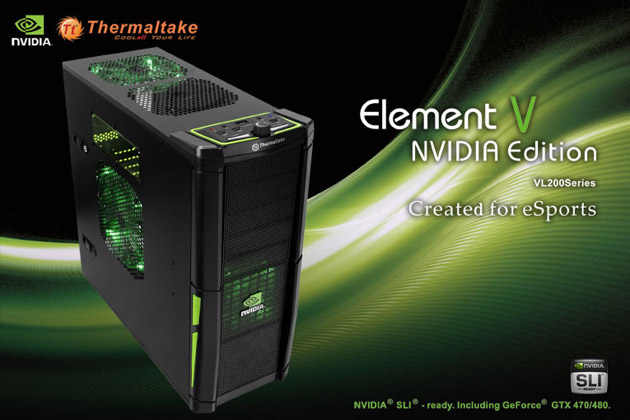 This is the world’s first Nvidia-certified full tower chassis. It’s the Thermaltake Element V, and it’s been specially certified to accommodate Nvidia’s two newest GPUs, the GTX 480 and the GTX 470. As you might imagine, a key feature of the chassis is thermal management. That’s to be expected given how hot those Fermi cards run.

Another key thing that blew my mind: 11 5.25-inch bays. Who needs 11 bays? Six 3.5-inch hard drives are supported, one 2.5-inch hard drive, and one SSD, so that leaves three slots open. Let’s say maybe you want a separate DVD burner and a Blu-ray drive—then what? What do you do with the final bay?

Seriously, let me know. I have no idea how you’d use up so many bays.

Nvidia and Thermaltake also worked together to come up with an “air duct” system that further cools the GPUs.

You know your GPUs are hot when you need to develop an air duct just to keep it from melting.

Of course, there’s enough room in there for up to four GPUs. Because who doesn’t have $2,000 to spend on video cards alone?

$219 for this bad boy. It may seem expensive, but it’s probably the last case you’ll ever need to buy for several years.