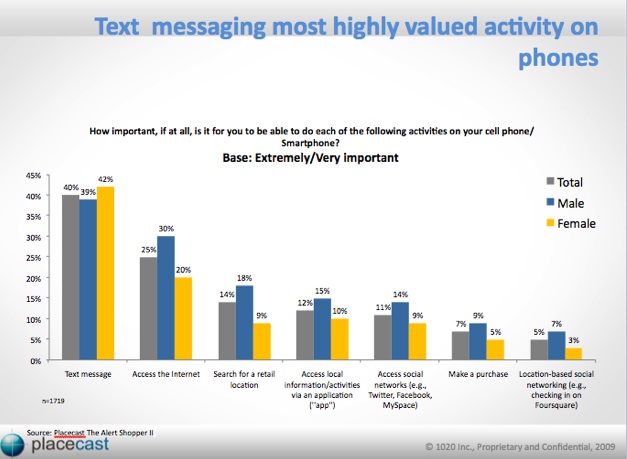 If you want to know why you can never trust a survey commissioned by a company trying to bolster its market position, just look at the slide above. Placecast, which is a text-messaging advertising service, commissioned a survey by Harris Interactive to measure consumer’s attitudes towards, and acceptance of, text-message marketing on their mobile phones.

The survey (embedded below) has some useful data for location-based marketers. But it reads more like pitch deck for Placecast. Guess what it finds to be the most valued activity on mobile phones?  Yup, text messaging.  And what do consumers think about location-based social networks like Foursquare?  Those are the least valued, according to the sample of consumers asked, with only 5 percent of respondents rating it as the most valued activity (and skewed more towards men than women).  In other words, Foursquare is a geek activity.  Geo-marketers should really focus on text messaging, which just so happens to be the business Placecast is in, not those geo social apps where Placecast doesn’t play.

The problem with these findings, beyond the fact that they are completely self-serving, is that there aren’t that many people using geo-social networks yet so most people you ask on the street won’t even know what you are talking about, much less rank it as the top activity. Foursquare barely has 2 million registered users.   Everybody with a phone is familiar with text messaging, which is a key feature of the phone. Sometimes people don’t know what they want until you give it to them and they try it. Surveys won’t tell you that.

Just because consumers love text messaging does not mean they love to be bombarded by SMS ads.  But the survey tries to paint a picture of growing acceptance.  According to the survey, 28 percent of adults, and 42 percent of those 18 to 34 years old are at least somewhat interested in receiving text-message alerts from marketers.  Now, the key here is that 98 percent of those surveyed say they do not currently get promotional alerts via text message.

In other words, it sounds like a good idea because they love text messages, but they haven’t actually been subjected to the constant pestering of an SMS marketing campaign. I’d love to see the number of people who are still open to text-message marketing after they’ve had to endure a few weeks of an overly-aggressive bar owner or club trying to get them to come back in every night.

Checking into a place via a geo app like Foursquare or Gowalla or Booyah or Loopt, and getting a promotion from that venue as a reward, or an offer from nearby merchants, is a much more powerful marketing mechanism.  First of all, it is not random and interrupting your daily life.  You get the promotion when you are most likely to be receptive to it at a location that is relevant.  Getting a text message come-on when I walk by a Starbucks is not a good brand experience.  Getting $1 off when I check-in is a good experience. Check-in promotions could become intrusive as well if overused, but so far that is not the case.

Obviously, there is a role for text-message marketing. And the survey does shed some light on areas that might be fruitful.  For instance, it is a good idea to send different SMS promotions to men and women.  Women are more receptive to grocery coupons and fashion deals, while men like offers for electronics and sporting goods. 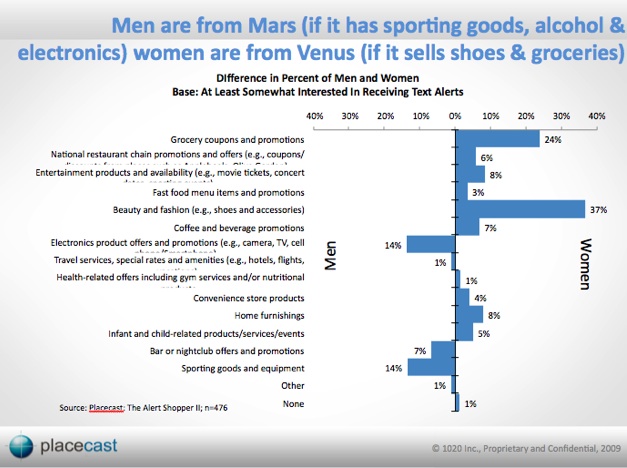