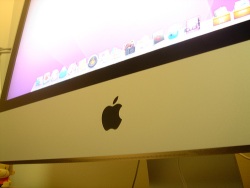 Seems people really like those all-in-one PCs à la the iMac. Sales this year are expected to grow some 63 percent from last year, to 11.5 million units worldwide. And while that’s good news for computer makers overall, there are winners and losers in the data. The big surprising loser? Yup, Apple.

This is the part where I say that my 20-inch iMac that I bought back in 2006 is still probably my favorite computer ever. Aside from having a nearly impossible to upgrade hard drive, it never gave me any problems whatsoever. It was, and still is, a workhorse. I still have it sitting on my desk, right next to my Franken-PC. It’s so refreshing to boot into Mac OS X from time to time. (And yet, somehow, people think I’m anti-Apple because I don’t approve of its every-single-thing.)

I guess the number make sense: you have to figure that the number of people who buy a full PC in 2010 is nowhere near where it used to be. Aside from gamers and content (video, photo, music, etc.) editors, who really needs a big, hulking tower sitting underneath their desk? Get a nice iMac-like computer, or a handy laptop, and you’re good to go. Seeing as though most people use their computer to check their Facebook, Gmail, Hulu, and maybe read ESPN.com or whatever, yeah, you don’t need GIGAHERTZ~! to do that.