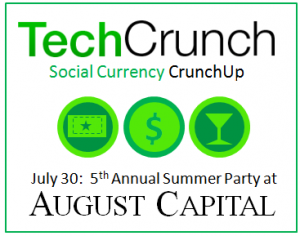 It’s summer and that time of year that August Capital graciously hosts us on on their fabulous deck so we can throw a roaring party that sends the VCs running from Sand Hill Road for the month of August. Actually, this year marks our 5th annual summer outing at August Capital and we can’t thank David Hornik and the other August Capital partners enough for keeping the traditional alive.

It’s also time for our summer CrunchUp, a one day conference held before the party. We started putting these together when we realized that people were traveling in from around the country just to attend a party. We decided we wanted to spend the whole day with entrepreneurs. First it was the Mobile Web Wars, then the Real Time Stream. This year, we’re really excited to announce that Stanford’s Arrillaga Alumni Center will host our conversation.

This summer, we’re hosting the Social Currency CrunchUp. As early adopters of technology, we’ve all grown accustomed that our opinions and product uses are not indicative of the average consumer. So what happens when we hit an inflection point and the masses matter? Do we really know what local merchants / SMBs need to support their businesses? What do we need to know about consumer psychology so our digitally delivered discounts resonate with consumers? What retail rules of the road do we need to honor to close a sale? How do we blend the best of virtual and real currencies to entertain consumers? That’s what we’re going to explore at the Social Currency CrunchUp. We’re going to mix up real-world consumers and traditional retailers and marketers alongside the hottest new startups to shake things up and debate the future. 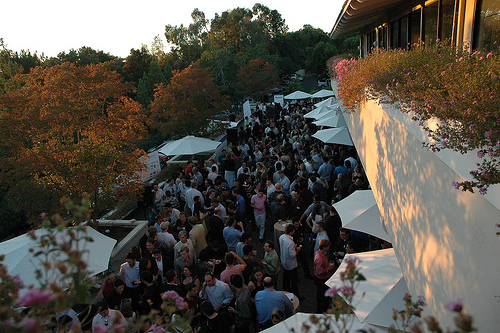 The CrunchUp event during the day will max out at around 500 people. The party is for a larger crowd but sells out extremely quickly. CrunchUp attendees also get a pass to the party.

About the Social Currency CrunchUp:
July 30, 2010
9 am – 4:00 pm
Arrillaga Alumni Center, Stanford University
326 Galvez Street, Palo Alto, CA 94305
Get CrunchUp-Party Combo Tickets Now @ Eventbrite: $295 INCLUDES admission for one (1) to the August Capital party and expedited fast-pass door entry. You DO NOT need to purchase a separate August Capital Party ticket if you purchase a CrunchUp ticket. Tickets are non-transferrable, based on availability. Capacity limited to 500 attendees.
All details here.

Please contact Jeanne Logozzo or Heather Harde for sponsorship opportunities to help support one of the most popular tech fests of the summer.