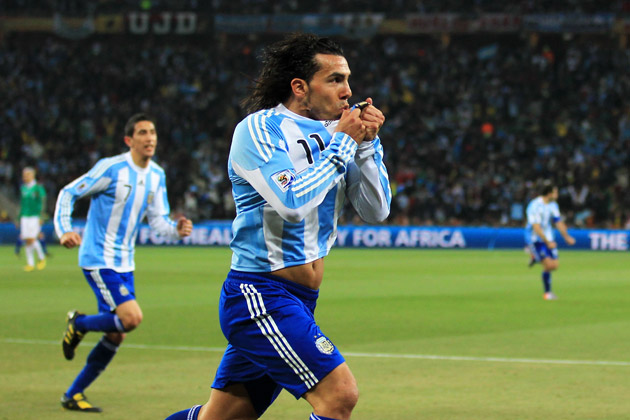 Credit to Pocket-lint, a fine site, for comparing the Adidas Jabulani, the ball that’s used in the World Cup, and the Nike T90 Ascente, the ball that’s used in the English, Spanish, and Italian leagues. The ides was to see if you could find out, once and for all, if there’s something inherent in the design of the Jabulani that makes it fly all over the place. Conclusion? Maybe, but the balls are so damn near identical that in no way can you say, “Well, Adidas screwed the pooch here.” Remember: Fifa is ultimately in charge of the ball, so if there’s anyone to blame (or praise) it’s those bozos.

The Adidas Jabulani, which Fifa has already said it will investigate after the World Cup finishes (at which point nobody will care anymore), is new to most of the players in the tournament. It’s been in use in the German league since December, so any player who plies his trade in Germany will have gotten used to the ball one way or the other, whether the ball is flawed or flawless.

(That in and of itself doesn’t seem fair, by the way. Fifa should have kept the World Cup ball off-limits till the national teams met up for their first day of training.)

Looking at the raw stats of the balls, both of them are basically the same. Circumference, water absorption, weight, etc. are all within ticks of each other. After all, they both have to abide by Fifa regulations.

The big difference, nearest I can tell, is that the Nike ball seems to have been designed, um, more “organically.” The Adidas ball was designed and engineered with robot feet kicking at precise, computer-controlled angles. The Nike ball relied much less upon the cold, unfeeling exactness of science and had more human-assisted development.

That’s not to say that the Jabulani is a science experiment gone wrong, but that the Nike ball had actual players involved from A to Z.

But again, to blame Adidas (or praise Nike) wouldn’t be the proper course of action. The buck stops with Fifa: creating ball standards and specifications, and with allowing players in the German Bundesliga a six-month head start to get used to the ball.

But I ask you this: does Carlos Tévez have any problem with the Jabulani? Doesn’t look like it!

Note that Fifa is taking these videos off YouTube, so if the video’s dead, blame Blatter.