Sal Dhanani, one of the co-founders of mobile GPS navigation company TeleNav, wants to “bring GPS navigation to the masses through mobile phones.” His company has been pursuing that dream since 1999 when TeleNav was founded. Today, TeleNav is bundled into millions of Sprint phones, and is also available through AT&T (including as an iPhone app) and other carriers. The company just went public in May, it has 900 employees, and its revenues last quarter were $45 million (with healthy net profits of $12.5 million). 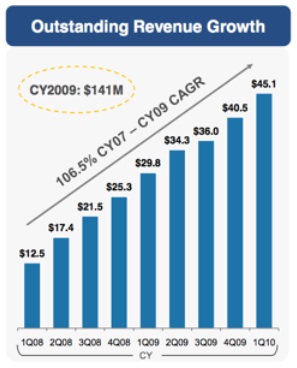 TeleNav is riding a trend of personal navigation devices becoming cheaper and cheaper, and, in fact, doing away with the standalone devices altogether by bundling the software into more than 500 different types of cell phones. It charges for its apps, and even after splitting revenues with the carriers, its revenues have grown at a 107 percent compound annual growth rate over the last three years. Everything finally seems to be clicking for TeleNav, especially as touchscreen smartphones take over.

There is only one problem. As cheap as TeleNav’s GPS navigation service is compared to more expensive devices, it still has to increasingly compete with free. Google, Microsoft, and Nokia all offer free navigation systems on their smartphones. Google Maps Navigation on Android phones is particularly awesome, and disruptive. The day that Google announced the app, shares plunged of traditional GPS navigation device companies like Garmin and TomTom. Later on when TeleNav went public, it had to reduce its IPO price range from $11-$13 down to $8. Today, the stock is trading around $8.50. 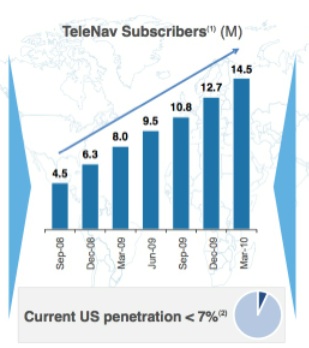 When Dhanani came to my office recently, I asked him how does he compete with free (watch the video above). His answer was twofold. He combats free with free and with better features. For many consumers, the app is free since TeleNav comes bundled with their phone plans, such as Sprint’s “Simply Everything” plan which includes other services. TeleNav makes about $1 a month per subscriber on the bundled apps. Deutsche Bank analyst Jonathan Goldberg estimates that Sprint alone accounts for 12 or 13 million of TeleNav’s 14.5 million total subscribers.

On the iPhone, however, consumers pay $10 a month, which TeleNav splits with AT&T 50/50. The TeleNav iPhone app, which initially is a free download, is one of the only subscription apps that bills directly through AT&T. In other words, Apple doesn’t see any of the subscription revenue. “Carriers don’t like third-party brands, especially powerful brands, coming in between them and their customer relationships,” says Dhanani. TeleNav gets an estimated 55 percent of its revenues from Sprint and 34 percent from AT&T. You know who they are batting for. 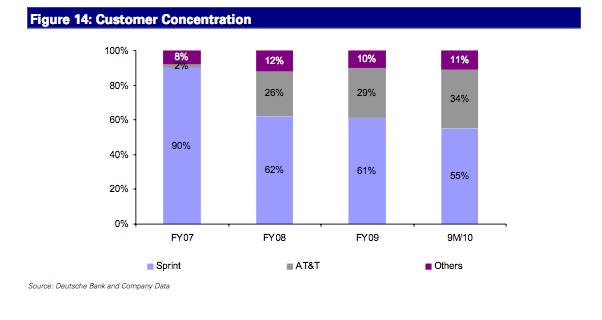 TeleNav tries to stay one step ahead of the free apps with better map data (licensed from Navteq and TeleAtlas), better routes, a driver-centric UI with big buttons and speech recognition, as well as special features like turning red when you go over the speed limit or showing traffic camera feeds.

TeleNav is going through a growth spurt right now. Deutsche’s Goldberg estimates that revenues will go from $168 million this fiscal year (ending in June) to $215 million next year. It is insulated a bit by its carrier relationships (T-Mobile, China Mobile, Bell Canada, and Rogers are other partners—Verizon is partnered with competitor Networks in Motion). As long as the carriers think that bundling navigation into its phones gives them an edge, they will happily keep paying TeleNav. They also don’t like to change things around once something is working.

But over time the free navigation apps from Google, Microsoft, and Nokia will become just as good or at least good enough that consumers will see no value in paying extra. Even where the apps are bundled for free, they might choose to go with the Google or another free apps instead if it offers a killer feature that TeleNav doesn’t. For instance, if one of the free apps included crowdsourced traffic data, a feature which TeleNav currently lacks, that could be enough to make people want to switch. Of course, Dhanani says TeleNav is also considering that feature. But it’s a downhill battle all the way to $0.