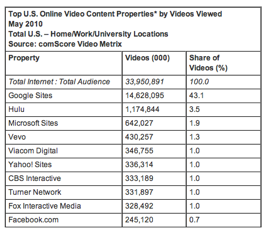 U.S. comScore video metrix stats are out today, with the number of video viewers rebounding in the month of May. According to the web metrics company, 183 million U.S. Internet users watched online video during the month compared to 178 million in April. ComScore reports that YouTube saw record viewership in May with an all-time high of 14.6 billion videos viewed and surpassing the threshold of 100 videos per viewer for the first time. The report also showed that 144.1 million viewers watched 14.6 billion videos on YouTube.com (which works out to 101.2 videos per viewer).

According to the release, 84.8 percent of the total U.S. Internet audience viewed online video. The average Hulu viewer watched 27.0 videos, totaling 2.7 hours of video per viewer. The duration of the average online video was 4.3 minutes. 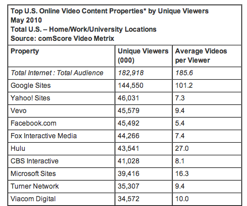