Looks like Nike is up to quite a bit more in South Africa than making sure Landon Donovan (and the rest of Team USA) is well-dressed while taking first place in Group C. (Fingers crossed!) I just got word that the company has constructed the biggest interactive LED screen in the whole of Africa. It’s on the Life Centre skyscraper that’s in Johannesburg. Now, what would you want to do with an giant interactive LED screen in the middle of a major city? 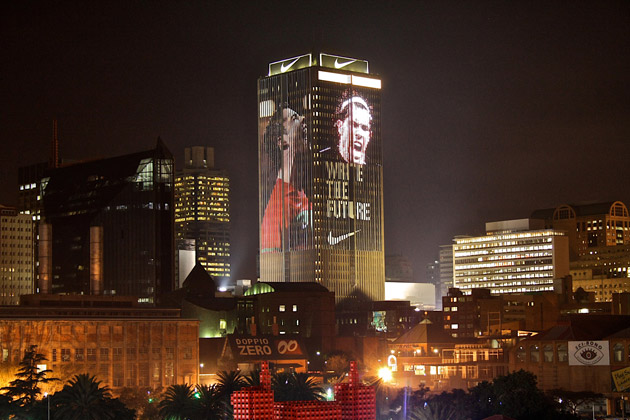 The best part is, let’s say you Tweet something along the lines of “Go Cristiano!” Well, when your Tweet appears on the big display, a quick little video of Cristiano will be played.

Meanwhile, in other World Cup news, it seems Vicente Del Bosque has dropped David Silva to the bench today. That’s not good news for my fantasy team, no sir. (BUT VILLA JUST SCORED AND HE’S ON MY TEAM~!)