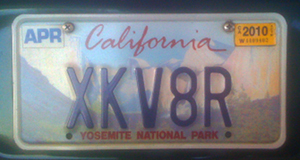 Just when you think that there’s no way you could have any more distractions while driving, California comes up with yet another way to put billboards on the highways and streets. Of course, the state’s budget crisis is well known, and lawmakers are currently discussing the possibility of changing to digital license plates, and then allowing companies to buy advertising time on cars.

Currently, the plates would only display ads while the vehicles are stopped, and the license number would be displayed (admittedly smaller) on the plates at all times, but this still sounds like a terrible idea to me. Light up advertising on a license plate? This just seems like an incredibly annoying idea that should die in the California legislature.