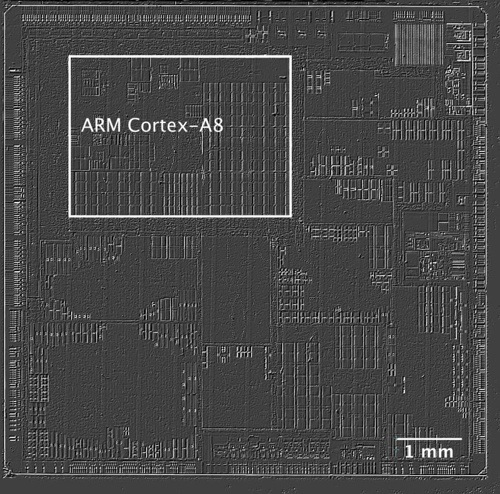 The money shot of EETimes’ analysis of the chip is their sum-up at the end:

Despite offering only an optimized version of a standard CPU, the A4 is becoming increasingly important to Apple’s strategy with it appearing now in the iPhone and surely in iPod touches to be released in September—not to mention any future iOS product lines. In all the discussion of CPU identity it would be easy to lose sight of the fact that the A4 is not the offspring of either an integrated semiconductor house or a fabless designer. It is from a mobile devices OEM (sorry Mac).

If you’re interested in the topic, the full article is interesting and quite readable, so give it a read.

So: the A4 is an excellent, optimized, and perfectly capable chip, but the discussion pretty much ends there. It’s stock parts with a custom layout (though part choice is an important factor), but fanboys spouting the idea that Apple is doing something momentous in the semiconductor industry will need to be silenced. As I said in my previous article, give credit where credit’s due: to ARM and the other hardware manufacturers for all the research put into developing these parts, and to Apple for curating a slimmed-down and powerful system-on-a-chip and designing excellent software that makes the best of it.

Now let us never speak of it again. Until the A5.