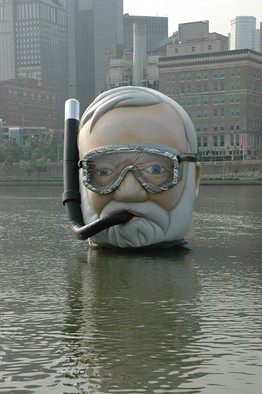 Just when you thought it was safe to go back into the Allegheny, Andrew Carnegie, industrialist and founder of Carnegie Mellon (my alma mater) goes and screws it all up. This giant head is currently floating amid the feces and detritus ensconced in that mighty river and was created by artist Stephen Antonson. He designed the head by taking old pictures along with images of a 3D bust of Carnegie to a fabricator who then painstakingly built up the noggin.

The last step was painting the inflatable with a special water-based paint and then sealing it with a clear coat. The piece was deflated, trucked to Pittsburgh from Cleveland, inflated at the river’s edge and towed out onto the river by a small boat. It’s held in place by four anchors. (This is the tricky part, because the river currents and wind speed are so unpredictable.) To keep the inflatable inflated, a generator set into a small boat floating behind the head runs constantly. The original design called for the generator to be hidden inside the head, but we learned the hard way that this was untenable because its heat began to melt the vinyl. I chalk that up to the making of the whole thing at mach speed—it was four weeks from start to finish and a piece like this usually requires eight!”

The piece was part of the Three Rivers Arts Festival. If someone from CMU’s EE department had made it, Carnegie would have had lasers for eyes.