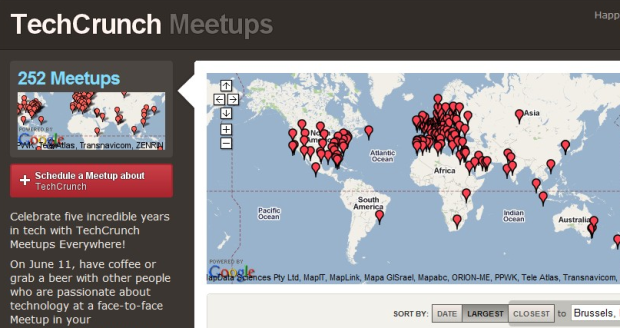 On June 11 (today), it will be exactly five years since Michael Arrington hit the ‘Publish’ button and started TechCrunch with his very first post.

So we’re celebrating this fifth anniversary with a world-wide series of meetups today. The event was already publicised on TechCrunch last month, but in case you didn’t notice, there is also a London meetup.

All of them were put on the new Meetup Everywhere platform that Scott Heiferman announced on stage at TechCrunch Disrupt to organize TechCrunch Meetups all around the world.

Globally, there will be over 352 meetups around the planet including, including New York City, San Francisco, London, Hyderabad, Bangalore, Seoul, Tel Aviv, Jakarta and Sophia.

Anyway, back to London. The meetup tonight will be from 7:00 PM

You can sign up here to the London meetup.

Please bring your own name badge sticker with a TechCrunch Europe logo on it. Be creative :-)

In order to buy you a few drinks to celebrate we’ve secured sponsors for the meetup:

HackFwd, the new startup seed programme in Europe. Read all about it here.

TechHub, the new physical space in London for tech start-ups, launching on July 5th. You can sign up to the TechHub preview tonight, see the layout and chat about plans. TechHub is next door to the meetup venue. More details here.