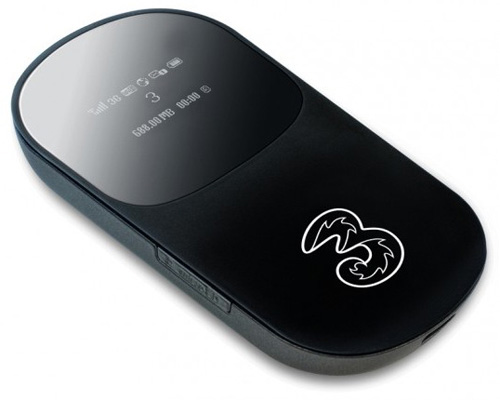 There’s something to be said for the “featureless lozenge” style — it’s nice for single-purpose devices like portable hard drives, for instance — but when you have to communicate rather complicated information like device status, battery life, and data throughput via a single LED, things get kind of confusing. That was my trouble with the MiFi, useful as it was: you had to learn its little code, and even then you weren’t sure whether you were going to go over in data usage. This new 3G WiFi sharepoint from Huawei, with the slightly less catchy designation “E585,” includes an OLED screen so you can see exactly what’s going on inside the little guy.

It’s only available in the UK right now (via 3 for ~$75 w/plan) but I get the feeling we’ll be seeing similar devices soon, if not this one specifically. I mean, how nice would it be to have a little network monitor with signal, total data transferred, battery, and whatever else you like on there?

The only issue is that, even being an OLED, that display might drain the battery a bit. Why not a tiny e-ink display like the one on this hard drive? It only needs to update every 10 seconds, or every minute, or whenever you press a button. Someone: make that.