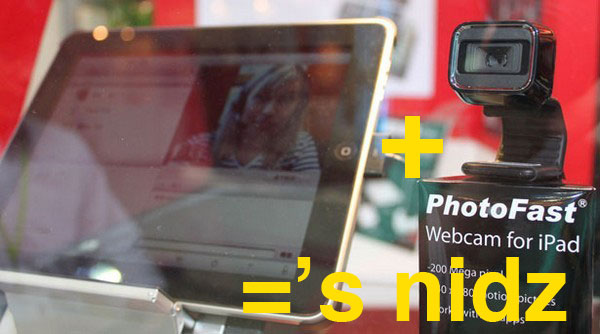 Photofast, a company known for producing flash memory products, has entered the realm of Apple accessories, most notably iPad accessories. The main disappointment we always had with the iPad was the lack of a camera. However, to see a Microsoft camera used as the capturing device, is well, a bit odd.

The thought of using an iPad for picture taking or video chat has been high on the list of features Apple left out of the iPad. Now Photofast has created a concept camera made from a Microsoft LifeCam that connects to the dock port of the iPad. Expected to release by the end of the year, the camera will be fully custom (not a LifeCam) and will spit out 2-megapixel images and VGA video that will work with IM apps.

The ambitious company hopes to also release both a TV tuner and a dock that reads memory cards and even backs up your contacts. Photofast has mentioned that these products are complicated to make work with iPad but hopes to bring the products to us later this year. Now the question is…will that be fast enough?