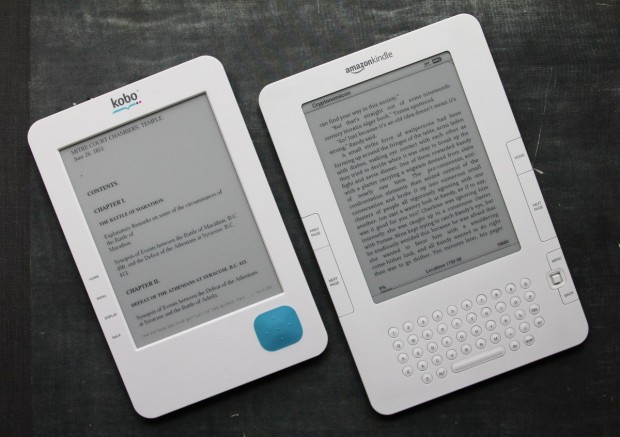 Short version: This low-price e-reader is a solid performer, as long as you don’t mind the total lack of things like notes, bookmarks, and WiFi. It reads books; if you want more, you’re free to pay more.

I wrote about the Kobo a little while back; a $150 e-reader, I thought, could reasonably be sold in bulk to universities and such for a truly reasonable price. This in turn would drive demand for e-books, which would drive demand for readers, and so on. But now, a few months later, with new devices on the horizon, that $150 price point is looking less and less attractive. After all, how cheap will a basic e-reader be in a few months when the new Kindle is announced, or the first relatively affordable color e-readers come out? But all this is by the by, and what matters right this moment is the quality and value of this device today. 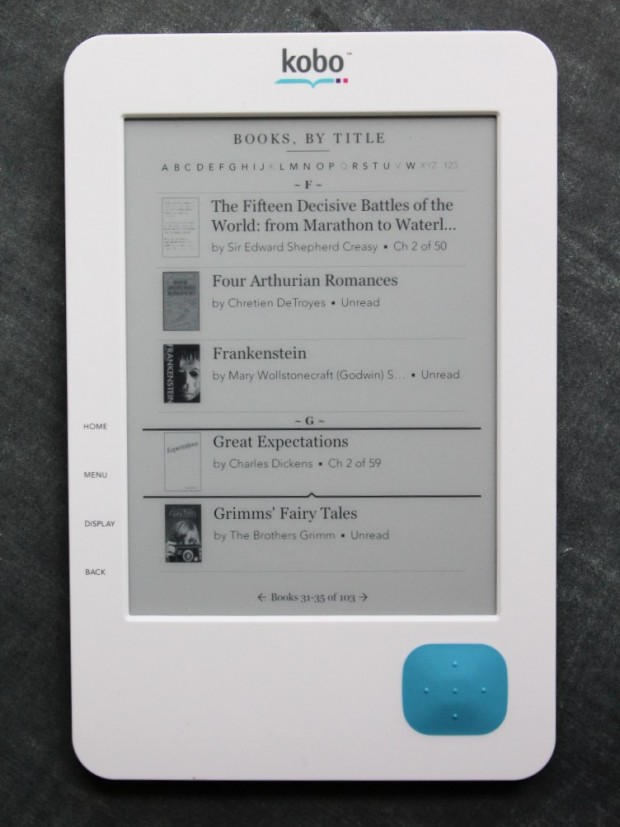 To begin with, let’s have no illusions: this is an e-reader and nothing more. While Kobo’s included software means you’ll have plenty of books to choose from, there is no way at all to do anything on this device but read books. There is no keyboard, no book store, no calculator, no nothing. If you want that stuff, may as well stop reading now. Go ahead, hit that back button!

Still with me? Okay. So once you get past the idea that the Kobo is essentially just a big stack of e-books behind a screen, it’s actually quite a decent little guy. Navigation is simple: you have your library, your currently reading books, and your documents. These are accessible at any time via the “menu” button. “Display” brings up the usual options: serif or sans-serif, five font sizes, and a choice (which I appreciate) of landscape or portrait. Moving between menu items (accomplished by the rubberized D-pad, which sticks out a bit) is about as responsive as you can expect from an e-ink screen, and while it ain’t quick, it’s competitive with other devices.

Loading up three medium-sized ePub books from Gutenberg and two smallish PDFs took perhaps 30 seconds once it detected the SD card. It then added them to my “reading” list, which is nice. Be aware, though, that if you put in several large documents at once it will likely take several minutes to process them. I occasionally saw the “processing new content” randomly, but never for longer than a few seconds. Books can be sorted in several ways, but the lack of a search did chafe me a few times as I plodded through the letters to get to “N” or some such.

The screen is about as good as any other e-reader I’ve seen; the usual e-ink ghosting and artifacts are present. PDFs look fine; the 8-level screen means you’ll see more dithering and banding than you do on a Kindle, but remember that a Kindle costs twice as much. Sure, a 16-level screen would be nice, but e-readers really aren’t the venue for art. I found text and graphics both in PDFs to be plenty sharp and contrast was good. An important thing, I think, is that the Kobo has one of the higher screen-to-bezel ratios out there — i.e. more screen and less controls, like a book. 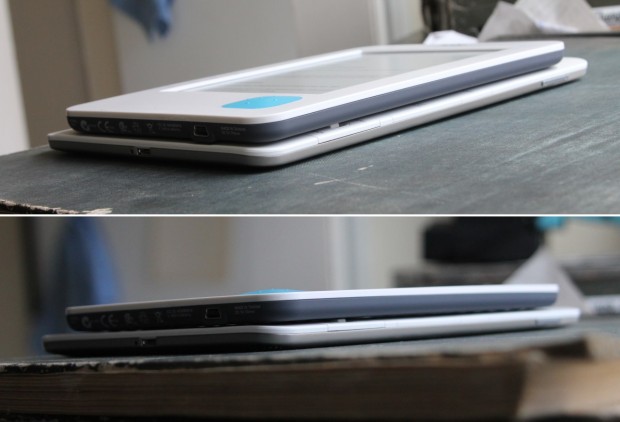 The device itself is quite nice: it’s thicker than the Kindle 2 by a millimeter, but has a significantly smaller footprint. It’s about the size of a trade paperback, and happens to be one of the lightest e-readers on the market as well. The back side has a pleasant “quilted” texture which feels natural under your fingers, though I wouldn’t say it really aids grip at all. Switching between the Kobo, the Kindle, and the Alex, I felt that the Kobo was the most comfortable to hold. The lack of a keyboard or touchscreen helps focus you on the text, and you’re not afraid you’re going to accidentally grip a function button. Build quality was solid, and the compact size makes it feel especially well-constructed.

Kobobooks.com can be browsed by anyone, but to get books on your Kobo you’ll need its little Desktop app (or just load stuff onto your SD card). It’s a straightforward, rather plain app (and bookstore) but again, that’s pretty much the point. Descriptions are limited to star ratings and synopses; the web bookstore is a bit more robust, but if you’re looking for in-depth reviews, excerpts, and other extra stuff, you’re better off at Amazon. The formats supported are ePub and PDF only – the Kobo is also Adobe DRM-friendly. It seems like support for plain text files wouldn’t have been too hard to implement, but as it is you’ll have to use a converter tool if you want to load any of those suckers on there. 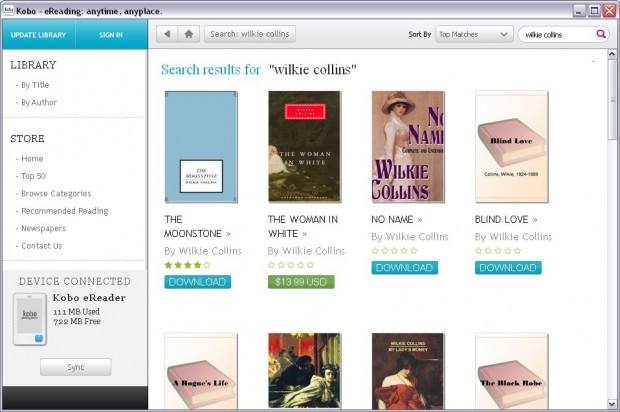 When you buy a Kobo, it comes pre-loaded with a bunch of classic books — 100, to be precise. A lot of my favorites are in there, but you might not like 19th century literature quite as much as I do. But it’s a nice gesture and the books themselves are well-chosen and well-presented. There are a ton more available for free in the store.

Although the market is rapidly advancing, the Kobo is a perfectly good little device right now if you know what you’re getting into. One commenter compared it to a Flip for e-books, which is a remarkably apt comparison. $150 is a reasonable price for a way to read the thousands of books out there, but if you feel you need touchscreens, utilities, on-device search and so on, this is absolutely not for you. I actually do see it as a great option for educational establishments; there’s little that can be done with it other than read, which makes it less of a risk to give to a bunch of students. Until the Kobo is out-featured at its own price point, this would be my choice for best e-reader value on the market.