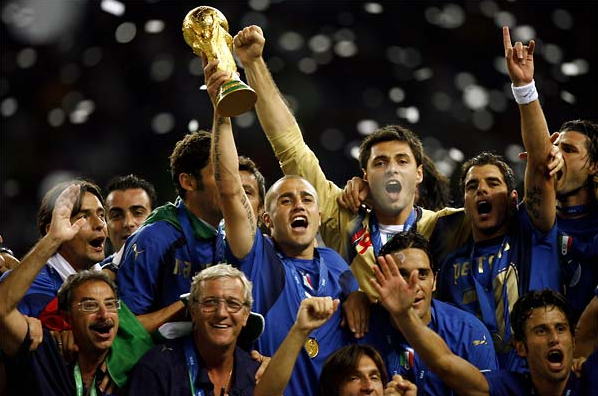 A little birdie told me that the World Cup begins in just a few weeks, on June 11, 2010, in South Africa. Four years prior saw Italy lift the trophy in Germany (above), beating France on penalties. Zinedine Zidane also headbutted Marco Materazzi that day—an immense event in Internet history. A lot of things have changed since that day in Berlin, a lot of things that will shock and amaze you. For example, did you know that Facebook was still only open to college and high school students the moment Fabio Grosso smashed the ball past Fabien Barthez? So, what else has changed between then and now?

• Probably the biggest difference between now and then is that we were living in a pre-iPhone world (to say nothing of a pre-iPad world). That’s right, when Italy won the World Cup in 2006 the iPhone still hadn’t made its public debut. It later did so in January, 2007, at MacWorld. Who can forget that day?

• VoIP has matured. There’s going to be 365 cafés in South Africa where Vonage Mobile users can call their friends in the U.S. for free.

• There was no PS3 or Wii. The two consoles didn’t debut until later that year, in the fall. The Xbox 360? Just sorta there, with no real killer app to its name.

• Twitter was not open to the public (but was being used internally) when the tournament began in June, 2006.

• Sirius and XM were still separate companies back then.

• There was no Amazon Kindle (and no nook, obviously).

• Microsoft hadn’t yet released Windows Vista, which it did in January, 2007.

• Famous BitTorrent site OiNK was still around. It wasn’t shut down by the man until October, 2007. ‘Twas a sad day in Internet history.

• All songs on iTunes were still encumbered with DRM. We didn’t even have iTunes Plus yet!

• The Microsoft Zune did not exist. In actuality, it didn’t really exist until the launch of the Zune HD last fall. The first versions of the Zune were decidedly “meh.”

• Google Chrome didn’t exist, while now it looks to be taking over the world (along with Google itself).

• The United States had a terrible broadband infrastructure, which, in a lot of ways, it still does.

• Microsoft was “bigger” than Apple.

• On a personal note, I hadn’t started playing World of Warcraft yet, something that didn’t happen until fall, 2006.

• “The Cloud” wasn’t quite the buzzword it has since become. Pretty sure “Web 2.0” was still on the tip of everyone’s tongues back then.

So as you can see, a lot has gone down over the past four years.

Who’s to say what exciting new developments will await us when World Cup 2014 kicks off in Brazil? Will Facebook and Twitter still be around? Will we be playing PS4 or Xbox 360^2? Will companies still insist on using DRM for whatever silly reason?

Or, was there anything that I missed? This list is by no means comprehensive, and was primarily put together while I was watching the USA vs. Turkey friendly on Saturday.

Ladies and gentlemen: the future awaits!