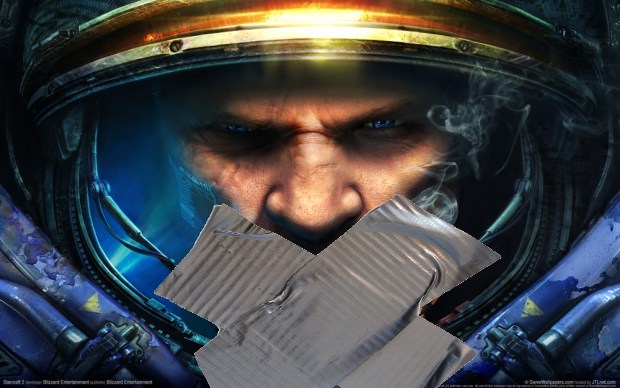 When I read this headline, I thought there must have been some mistake. I mean, as we all know, StarCraft is the life-blood of South Korea. How can Blizzard release a gimped version of the game over there? 1up calls it “heavily edited,” and perhaps “censored” is as much an overstatement as “heavily edited” is an understatement. The game was given a provisional AO rating over there, and now Blizzard has rejiggered and resubmitted it, with black blood instead of red, toned-down smoking references, and less “vulgar” language.

Remember, this is a game where you send soldiers to gruesome, extraterrestrial death by the thousand.

I guess it’s not such a big deal, but it’s depressing to see something so deeply embedded in the national identity of the crisis being compromised by spurious and arbitrary “moral values.” Blizzard is considering releasing an intact version separately, which I’m sure they must do, as that will be considered the “definitive version” and if they don’t, someone will just write a 100MB hack that fixes everything.

It’s a bit like when a director makes a movie, and then the producer or studio thinks they need to add this or that, cut out this scene, give the protagonist a CG sidekick… of course we’ll all wait for the director’s cut. No doubt StarCraft II will arrive in the US whole, cigarette references and all, and with stuff like Bulletstorm already threatening our impressionable youth, I don’t think the moral pundits here in the states will even bat an eyelash.