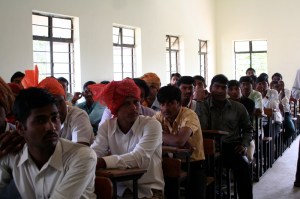 I always tell entrepreneurs outside of the Valley—whether they are in the middle of my country or a developing one—if they want to build the next great social media darling aimed at a Western audience, they’re probably better off moving to the Valley.

It’s not that you can’t do it elsewhere: The right entrepreneur at the right time with the right opportunity can largely build a great company anywhere. But in the Valley it’s easier to get funded, find the right talent and get acquired—which are three things most high-growth startups are going to need. In this new media game, connections matter at least as much as the best features and technology.

So with that in mind, I get excited when I see other countries exploiting holes that the Valley just isn’t going to tackle. One of those is mobile apps for non-smart-phones, as I’ve written about at length. Another is online education.

Online education was tried and mostly failed in the Valley in the late 1990s, with University of Phoenix a rare billion-dollar-plus win. Rosetta Stone is one of a few examples that’s made it big since, and despite some awesome software that approaches language learning in a new way, the company has still floundered since going public in 2009. Its stock is off its lows, but hardly soaring.

I’ve spoken to many venture capitalists who say they’d love to use technology to change education, but few think they can make money at it. So when I started reporting in other countries and kept meeting entrepreneurs starting e-learning companies, my first thought was “Keep walking, nothing to see here.” But recently, I’ve started to wonder if this might be the next great online market to be disrupted – and, lucky for emerging markets, it’s one the Valley is mostly not paying attention to.

The Valley’s lack of interest is partially because, comparatively, we don’t really have an education problem in the United States. Yes, it could be better, but compared to other countries, our educational system teaches people how to think instead of just how to memorize, and most everyone has access to some level of education—including, frequently, higher education. (What they chose to do with that access is another matter.) We do have some real problems when it comes to education, but let’s be honest—they are first world problems. If you are reading this and getting outraged, you haven’t traveled enough. Our education system is the envy of a lot of the world.

But in emerging markets, modern education is still developing on an elementary, collegiate and vocational level. Burgeoning populations who want better opportunities are struggling under the confines of what young democracies can provide, giving a huge opportunity for private, for-profit education systems to play a bigger role than they’ve played in the West historically. And obviously, the Web and mobile is a big part of this. It’s not just about access, it’s about breaking learning down into affordable, consumable chunks—the same way the Web has broken music and media down into sell-able, bite-sized pieces of the song and the blog post. Some of this is happening inside the classroom and some is redefining what a “classroom” is.

I am writing this post from Indonesia where I was stunned to read the country has an 80%-plus literacy rate for people over 15 years of age. Many moguls have their own colleges, the way they may have their own magazine or reality show in the West. And while many are motivated by a sense of responsibility, my understanding is that most are for-profit ventures.

In India, there are already large companies like NIIT, which is known mostly for vocational education and is reaching down into slums and upwards in the economic pyramid with new e-learning courses. Also in India, I came across a division within a large finance company called IL&FS that was delivering English lessons over mobile phones, using voice, SMS and numerical dialing to answer multiple choice quiz questions. The lessons are highly affordable—especially when a group of village kids gather around a mobile phone set on speaker on a hot Indian night.

Rio-based ezLearn is aiming to become the largest skill-based learning site in Brazil, the first product being an English language-learning site, which tries to make learning fun. It has 4,000 paying customers in less than six months in business and is started by Ana Gabriela Pessoa, who got a graduate degree in education from Harvard then went back home to make a difference. (And hopefully build a successful company.)

Similarly, last week in Cape Town, I met a company called GetSmater that also aims to use the Web to market accessible, vocational, skill-based learning, although languages are one of the only areas it isn’t going after. While ezLearn focuses on fun, video, social media and game-play to learn, GetSmarter is more rigorous, requiring six-to-15 hours per week of work by its students and partnering with the University of Cape Town and Stellenbosch University. The company spun out of a family services business, and has trained just 4,000 students in two years, but has upped its growth dramatically in 2010 and is on track to almost double that this year, says founder Sam Paddock.

Lastly, I haven’t met them, but Israel’s Time to Know is an ambitious effort that focuses on bringing technology into classrooms in a substantial way. (Our coverage is here.)

There’s something else interesting about this market: If successful, it could help bridge the “laptop divide.” The “digital divide” has already been well bridged by mobile phones, but not everything can be done over mobile. Top quality, locally-designed education software could be a good reason for people or well-meaning NGOs and nonprofits—to pay up to give underprivileged laptops or netbooks.

Valley companies like Intel pushing for there to be such a catalyst, should do whatever they can to prop this movement up. If they’re concerned about emerging worlds skipping the computer revolution, opting instead for cheap, Android-enabled smart phones produced in China, education could be a killer app. I’m not saying it’s time for a Valley resurgence in e-learning, but maybe Valley investors should be investing in the resurgence already happening around the world. Whether they agree or not, there’s something big brewing here.