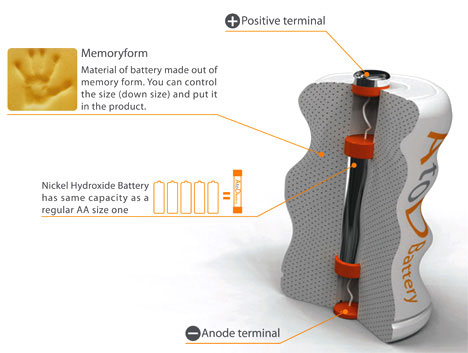 We have to give concept designers points for trying, but I don’t think this resizable battery is going to fly. For one thing, the actual core is tiny, and batteries derive their power from packing as many volatile chemicals into their little bodies as possible. Imagine putting six of these, at D size, into a boom box — the thing would die in like 15 minutes.

There’s also a question of heat. That memory foam is, I’m guessing, rather a good insulator. Batteries generate heat when they’re in use and rechargeables really hot up when they’re plugged in. I’d be concerned that these suckers would catch fire.

That said, though, it’s good to see thought being applied to battery design. Unlike wall outlets, which are surprisingly hard to improve on, batteries are pretty much a blank slate. Sure, we’ve got AAs and stuff, but there’s a lot of room to play in as a designer. This particular concept just doesn’t seem to have legs.