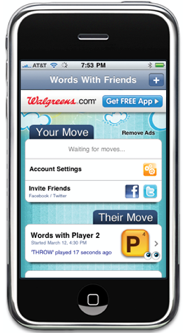 Greystripe, an ad network that has been known for its full screen rich media ad formats that bring Flash-like technologies in their iPhone advertisements, is expanding its library of ad formats today. The ad network now offers advertisers a full range of in-application banner ads in a variety of formats, including including static, animated and expandable-to-full screen rich media ads for the iPhone.

Banner ads tend to take up a smaller portion of the app real estate and some developers actually prefer the banners to full screen. In the case of the banners, Greystripe is launching two versions. One is a static (non moving banner) and the second is a rich media version that when you click on it, starts to animate and roll down into a full screen experience. Like all Greystripe ad formats, the new banner ads provide a variety of click-to-options that do not require the user to leave the application, including click-to-web, click-to-buy, click-to-map and more. Following this release of iPhone banners, the Company also plans to roll out its banner ad formats across all major mobile platforms, with Android support in the next few months.

So why the the addition of new formats for Greystripe? Perhaps the ad network is anticipating competition from Apple’s iAd advertisements and is looking to expand its advertising offerings. Greystripe claims that its expandable-to-full screen format has some similarities to Apple’s iAd format but will use Greystripe’s proprietary iFlash technology deliver ads to the iPhone as HTML5.

Despite the threat from competitor AdMob and now Apple, Greystripe has continued to make its rich media ad offerings more appealing and attractive to both developers and advertisers by extending support to various devices and even launching a guaranteed CPM program. And the ad network just announced an iPad SDK.

Advertisers who develop Flash advertising campaigns using Adobe tools and workflowswill now be able to develop their own creatives for a fraction of the cost it would take to code ads in HTML5. According to Adobe, over 90 percent of creative professionals have Adobe software on their desktops. Greystripe also offers a full range of creative services.