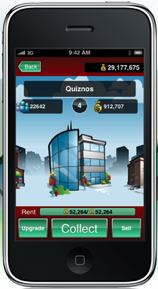 Booyah unveiled a new partnership with Google at the I/O conference today, the creator of MyTown will be the “first and leading” partner of Google’s recently announced Places Web Service feature.

“Our collaboration with Google bridges the gap between the consumer and businesses by enabling MyTown as a vehicle for real-world benefits,” CEO Keith Lee said in a statement. “The new API affords lightning fast search for local directory content both in the US and abroad, further growing MyTown’s presence and Booyah’s leadership in real-world interactive entertainment.”

Booyah is going through a heavy news cycle. Earlier this month the company hit 2 million users, then on Monday, the company announced $20 million in new funding from an investor group led by Accel.

The API will give Booyah’s MyTown access to Google’s massive data set of over 50 million locations around the world. Currently, Booyah has roughly 2.1 million users, but all of these users are based in the United States. Through the Google API, Booyah will be able to rapidly expand to other countries (without having to form custom partnerships with local directories).

Beyond the international picture, the treasure trove of data will also allow Booyah to enhance the features of MyTown. For example, the API will let Booyah users access the top 20 most popular spots near any given location (MyTown can tailor this feature to expand beyond 20 or by category). That creates an interesting layer over the company’s virtual gaming world that enhances its function as a social utility. And according to Lee, Google’s data will help check-ins become more accurate than MyTown’s current system (an improvement that will help Booyah’s deals with corporate partners, like H&M).

This is of course the first time Google has exposed its Places API to third party developers.

“This data that we’re getting will allow us to build the core experience, this will bring a lot of social utility.” Lee told us this afternoon. “This is more of a strategic direction for us… It’s huge because we don’t have to build our own geo database ”

Although Booyah’s MyTown has focused on gaming mechanics since day one, the partnership with Google and its increased social utility, makes MyTown a closer competitor to other location based services. According to Lee, it may also mean more money for Booyah: MyTown could eventually funnel real world offers and coupons from Google through the API (developers would likely get a nice cut of revenues from this model).

It will be interesting to see how other developers leverage Google’s Places, and what that means for the LBS game. Dennis Crowley’s Foursquare may be a “well oiled machine” compared to its competitors, but what happens when you throw a Google engine into the mix?

“Our collaboration with Google bridges the gap between the consumer and businesses by enabling MyTown as a vehicle for real-world benefits,” said Keith Lee, CEO, Booyah. “The new API affords lightning fast search for local directory content both in the US and abroad, further growing MyTown’s presence and Booyah’s leadership in real-world interactive entertainment.”

The Places Web Service is a new feature of the Google Maps API, which returns the 20 most popular places near a given location. It helps to generate suggestions of businesses or points of interest that represents a user’s current location and provides relevant details about those places.

“We’re excited to be partnering with Booyah on our latest addition to the Google Maps API, the Places Web Service. MyTown’s unique way of engaging users with their real-world location and Google’s rich coverage of place search combine to make a compelling offering for the rapidly growing MyTown community,” said Thor Mitchell, Product Manager for the Google Maps API.

Currently taking place in San Francisco, the annual Google I/O showcase brings together thousands of developers for two days of deep technical content, focused on building the next generation of web, mobile and enterprise applications with Google and open web technologies.

Booyah, dedicated to social, mobile forms of entertainment that combine elements of the real and digital worlds, successfully launched MyTown in December of last year exclusively for the iPhone and iPod touch. The company confirmed that more than two million users are actively buying properties, collecting rent and checking-in to real places in MyTown. Booyah recently executed successful branded campaigns with prominent youth-oriented apparel retailer H&M and national cable network Travel Channel to bring players real-world rewards and virtual in-game items. The population of the app grows by more than 100,000 players each week and users spend more than an hour per day in MyTown, on average.
“Booyah is thrilled to incorporate Google’s innovative Places Web Service in MyTown,” said David Wang. “Through the new user interface, Google enables mobile users to grow, expand and develop their MyTown communities, in the virtual space and real-world.”