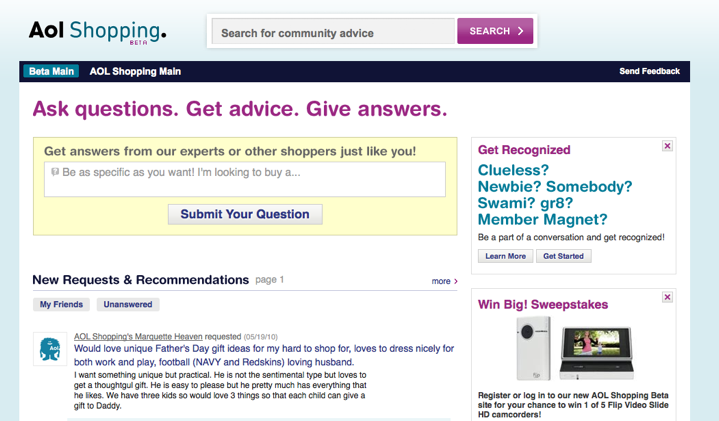 According to a Tweet sent out by former Mahalo developer Chris Finke, AOL is rolling out the beta of a shopping advice portal. Finke said in his Tweet that he was working on the project at AOL, which allows you to submit a shopping or product-related question to a public forum, and then other participants can comment and add a recommendation.

AOL Shopping staffers also seem to be answering users questions, and generally linking to products on AOL shopping for more information. According to the AOL Shopping Beta site, users can interact with other shoppers, ask fellow shoppers questions about products and get advice on what to buy.

Interestingly, the site is also a pseudo social network. You can follow shoppers and rate people’s advice and much more. The more active you are in the AOL Shopping Beta community, AOL will reward you with points and achievements on your profile page. The site also shows the most recommended products and the participants with the most points. It’s unclear how you can actually use the points, but it would be neat if you could use them towards purchases or discounts.

AOL shopping got a redesign last year, making the site more deal-friendly and interactive. It appears the next step for the portal is to become more social.

In August 2009, Finke left Mahalo to lead development for AOL-owned resume hosting site Emurse. But it looks like Finke has been using his Q&A development skills in other places at AOL.

(Hat tip to Steve Poland for spotting this!)