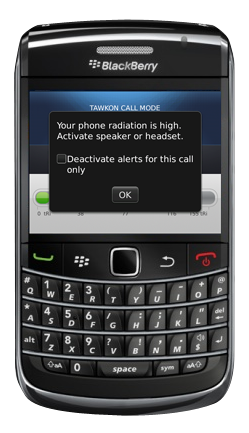 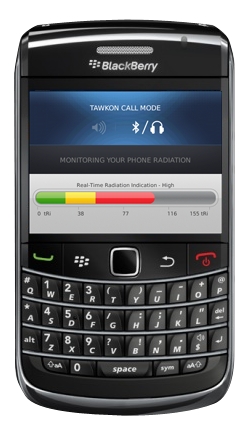 Tawkon, whose cellular radiation measurement iPhone app was initially rejected by Apple, is today announcing availability of an app with identical functionality for BlackBerry.

From our initial review of Tawkon:

The purpose of Tawkon’s app is to provide the user with an indication—or “prediction” as they call it—of the radiation level being emitted by the iPhone. This level changes based on environmental conditions, distance from cell towers, and even the manner in which the device is held. To illustrate: the iPhone’s antenna is located at the bottom of the device. If the user cradles the phone too tightly in the palm, the antenna has to work harder, thereby increasing radiation.

The 3GS models have improved chipsets, so radiation would be lower on them compared to previous versions, and Tawkon takes this into considering when calculating its prediction.

Tawkon for BlackBerry is available for download today, at a cost of $9.99. The biggest difference between the iPhone version and the Blackberry version, is that the latter is able to run in the background. All calls are automatically monitored without the user needing to proactively engage Tawkon (as was the case for the iPhone app we reviewed).

Once running, a small icon on the main screen provides constant indication of the current radiation level. A green icon means all is fine and a yellow indicates a moderate radiation level. A red icon means there’s a high level of radiation, in which case the Tawkon app will prompt to use precautionary measures such as to distance the phone from your body while making a call.

TechCrunch’s initial review of Tawkon created a wave of interest for the iPhone app, along with additional frustration at Apple’s rejection of it. It seems this did not go unnoticed by the good folks at 1 Infinite Loop, who reached out to the Tawkon team and invited them in to the HQ. Gil Friedlander, Tawkon’s CEO, gave us his impressions:

“Apple definitely saw the media and user interest in tawkon. They’ve been very positive about working together with us to open undocumented APIs to get tawkon on the App Store. It’s been quite a ride – through a series of exploratory phone calls and a very productive meeting with Philip Shoemaker [Director of Application Technology] and his team at their Cupertino headquarters.

The iPhone team complimented our app, and we’re now optimistic that we’ll get onto the App Store. Now we just really need to show Apple that people want the opportunity to use their phone responsibly with minimal exposure to radiation when necessary.”

You can help Takwon makes a stronger case to Apple, by joining their petition, here.