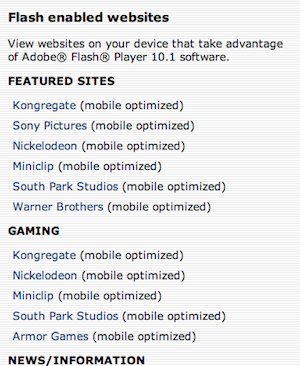 It’s widely expected that Google will unveil the latest version of Android, 2.2 (codenamed “Froyo“), at Google I/O which starts on Wednesday. The update is promising big things including huge performance improvements, tethering, and the ability to create your own WiFi hotspots with your phone. Another huge feature is expected to be the integration of Flash 10.1, a version finally optimized to run on mobile devices. And Google is apparently going to be highlighting the feature the moment you update to 2.2.

From what we hear, Android users with phones eligible for the 2.2 upgrade (Nexus One, Droid, and soon, HTC Evo) will be greeted with a link to an Adobe Mobile website after the upgrade. This page will give you the option to “View Flash enabled websites” or “Get Adobe products.” If you click on the first link, you’ll get a full list of sites Adobe is featuring that take advantage of Flash 10.1. These sites include Sony Pictures, Warner Brothers, BBC, Google Finance, and a whole range of others.

In fact, the list of sites is already live for both the Nexus One and the Droid. What’s odd is that the list is different depending on what device you’re using (Droid shows many fewer sites). I have no idea why that is, but maybe that will change before the launch.

Adobe’s Mobile page also lists sites enabled for Flash on the Palm Pre. And, humorously, has a page for the iPhone which has a “Get apps” link rather than a “View Flash enabled websites” link.

This list seems to be a direct response to Apple’s list of sites that are optimized to run on the iPad — meaning, they don’t use Flash. It’s an obvious thing for Adobe to do, but the most interesting aspect is that Google will apparently promote it. Clearly, they believe Flash support will be a big selling point of Android phones versus iPhones. And Google is also working with Adobe to bake Flash into its Chrome browser (and yet, soon Chrome OS too).

In case it wasn’t clear, the war between Google and Apple is on. And Google is moving fast to ensure that Adobe is one of its soldiers.