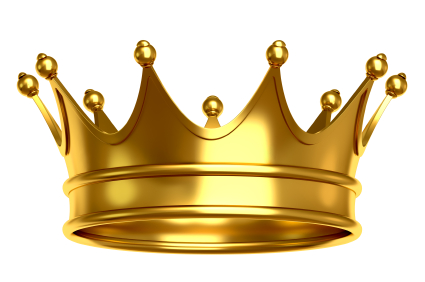 Editor’s note: Can Facebook become the next Google? In this guest post an ex-Googler, Bindu Reddy, persuasively argues the case from the perspective of Facebook’s potential as an online advertising platform. Reddy is the CEO of MyLikes, a word-of-mouth ad network funded by other former Googlers. At Google, she managed a team of product managers in charge of various Google apps including Google Docs, Google Sites, and Blogger.

Today, Google is the place to go to if you are looking for information about pretty much anything. By displaying sponsored links that are relevant to what you are looking for, Google showed us that ads are most effective when they are useful. So effective, that Google built a $25 billion search advertising business over the last decade.

However, Google’s search advertising business is inherently constrained by the fact that it works only when users are already looking for something. You have to search for makeup before Google can serve an ad for the latest Dior mascara product.

Facebook on the other hand has become the world’s identity gatekeeper—your age, sex, location, where you went to school, where you work, who your friends are—all of this personal data is used to serve you tidbits of information that you are likely to be interested in. Want to see pics of your cousin’s wedding? Want to know what movies your co-workers are watching this weekend? What music your friends “like”? You need to go to Facebook. The bottom line is that you are now trained to go to Facebook to discover things. With the growth of the Facebook app platform and support (so far) from apps like Farmville and Mafia Wars, Facebook has also grown into the number one destination on the web for entertainment and spending time.

Just like Google introduced sponsored search as an advertising model which fits in seamlessly with search results, it doesn’t take a whole lot of imagination to see how Facebook could build brand and discovery-based advertising into its product which will be useful to members. Like Google’s AdWords, Facebook ads will be most effective when they are integrated into the core product and are very relevant to the user. 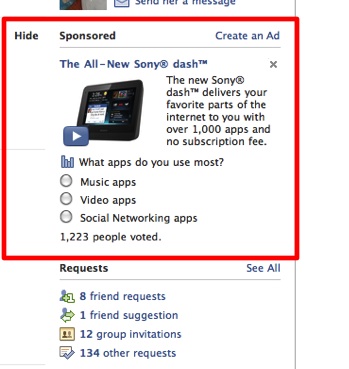 Take for example, the sponsored ad from Sony at right. It’s a sponsored poll widget I can actually interact with. Much like a mini Facebook-app it amuses me with a poll while ensuring that I interact with the brand. Innovative ad formats are rapidly evolving on Facebook as marketers figure out smarter and smarter ways to catch our attention. It’s only a matter of time before Facebook figures out how to make brand advertising useful and effective on Facebook.

Unlike Google AdWords, this model will not be constrained by the fact that you have to actually look for something. You don’t have to search for makeup, you simply have to log into Facebook, and be a young woman fashionista to discover Dior Mascara. Dior can reach many more potential customers this way than by just advertising on Google Search.

With an effective and useful discovery advertising model, Facebook, is the first web company that has a very good chance of getting a significant share of the traditional TV and offline brand advertising market (estimated at about $132 billion). Given than search advertising is still just 6.25% ($25 billion) of all advertising dollars ($458 billion), Facebook may well surpass Google’s advertising revenue, and market cap, in the next decade.

Will we see a replay of the early half of the last decade when Google rapidly grew to take over Microsoft’s top spot as the premium technology company? This time around it might be Facebook’s turn to replace Google and it is not clear that there is anything that Google can do about it. Here is why:

Google’s ad business models are based on intent and relevance and not on discovery. The performance based AdWords and AdSense models are easier to measure and appeals to the logical / analytical minds at Google. The power of influence, discovery and brand advertising needs more right-brain thinking than Google’s left brainers are used to.

Also, instead of innovating and exploring new forms of brand advertising, Google’s strategy in that space over the last few years has been to simply buy DoubleClick which is the leader in old-school brand advertising (mostly banner ads). This basically means that there is no fresh thinking in this area at Google compared to Facebook, which understands the power of discovery and recommendation.

As Google readily admits, the most powerful people at Google are the engineers. Product management, like other non-engineering organizations at Google is more of a service organization. This essentially translates to Google being good at technology-heavy offerings and mediocre at product-heavy offerings.

Give Google a technology challenge—Build the largest search index (Google search), the biggest storage system (Gmail), the fastest browser (Chrome) or the niftiest javascript interface (Maps) and Google excels. Turn around and give it a product challenge—Build a community video site (Google video), a social network (Google Wave, Buzz and Orkut), an e-commerce platform (Google product search) and Google’s offerings are more mediocre than excellent.

Google’s technology infrastructure, is optimized for large scale data sets and not rapid iteration. Its engineers like working on better algorithms and large systems and not on understanding the social behavior/economics behind a rapidly-evolving user-generated community site (perhaps with the exception of the folks at YouTube).

Google has an incremental product strategy when it comes to its core products.

Unlike Facebook, which constantly makes drastic changes to it’s core product, even at the risk of annoying some of it’s users, Google’s strategy on core apps such as Search and Gmail is largely very data driven and incremental.

Google cannot leverage it’s core apps to compete against Facebook with this kind of incremental approach. Only recently with the introduction of Buzz as part of GMail and the left-navigation bar as part of Google Search has Google begun to make bolder moves. However as with Buzz, these changes seem to be too little too late and it is not clear if they have the wherewithal to stay the course.

Given this, I seriously worry whether there is a good chance Google might lose it’s dominance. What do you think? Will Facebook execute brilliantly and become tomorrow’s Google or will Google wake up and triumph over Facebook much like Microsoft did with Netscape?