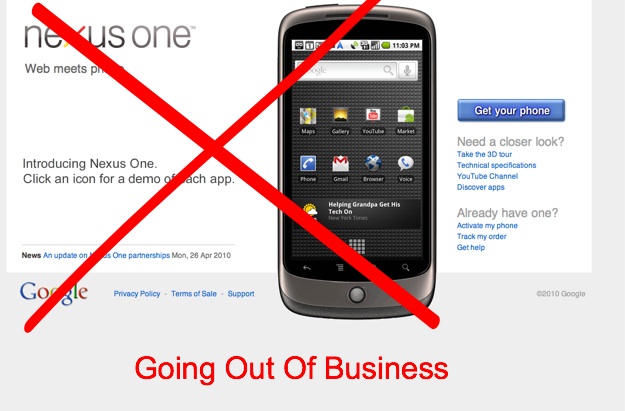 When Google launched its Nexus One Android phone, it also launched alongside it an online phone store where the Nexus One and future Android phones would be for sale. It was a slightly disruptive play to de-link the purchase of a phone from an actual carrier. The idea was, you could pick your phone, pick your plan, and mix and match.

Well, it didn’t turn out that way. Carriers don’t like to give up control. In fact, Verizon decided not to sell the Nexus One at all, and instead opt for its own more Incredible Android phone. The phone store turned out to be a flop, and Google just announced that it will be closing up shop online:

While the global adoption of the Android platform has exceeded our expectations, the web store has not. It’s remained a niche channel for early adopters, but it’s clear that many customers like a hands-on experience before buying a phone, and they also want a wide range of service plans to chose from.

The Nexus One phone will still be available through carrier partners. But Google’s online phone store will become an “online store window” showcasing Android phones available globally—directly from the carriers. Google has enough on its hands going up against Apple. It needs the carriers on its side if it wants to win the bigger battle.