Online pawnbroker Internet Pawn, self-reportedly the first of its kind in the United States, this morning announced that it has completed a $1.5 million Series A equity financing.

New investors Daylight Partners and Access Ventures have joined the company’s founders in the financing.

The best part of the announcement is the name of the Daylight Partners partner that has joined the company’s board as part of the deal: Rocky Mountain (a Dell veteran).

Internet Pawn was established in 2009 by people who’ve actually owned and operated a chain of brick-and-mortar pawn shops in different states, so this is actually not a poor investment at first glance.

The startup essentially offers short-term loans based on the collateral of customers’ personal valuables (like that PlayStation 2 or early Zune you still have lying around somewhere).

Internet Pawn says it offers cash quickly, doesn’t require payment of interest for six months, and lets people do it from the security and privacy of their homes. More info on loan rates is available here.

The company adds that it will loan on “just about anything legitimate and of value” but specializes in providing loans for Rolex, Omega, Tag Heuer, and Breitling watches.

If a customer decides not to repay the pawn loan amount and any unpaid pawn service charges (“redeem” the loan) after the 180 loan period, the customer “forfeits” the property to Internet Pawn in full payment of any and all amounts owed to them.

Internet Pawn will then sell the item. 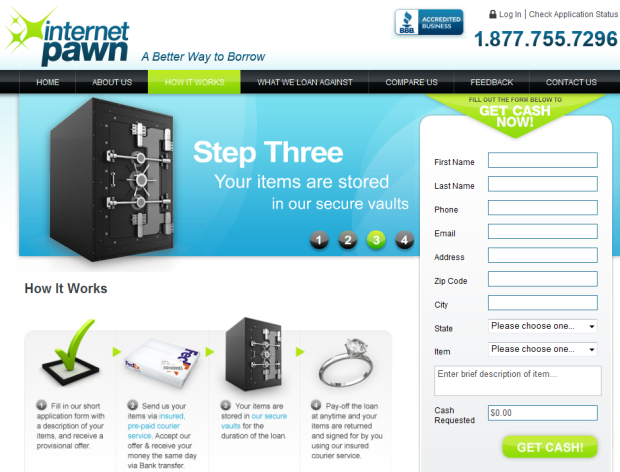